The "Creature Feature" column in the Strategic Review continued in The Dragon, with full color illustrations for many of the creatures.
The Dragon #1 (June, 1976): The Bulette (a.k.a. Landshark)
The bulette was created by Tim Kask.  Like the owl bear and the rust monster, it was modeled after one of the plastic toy "prehistoric animals" manufactured in Hong Kong.
The name was derived from the creature's appearance - that of a "bullet".  It is described to have been cross-bred from armadillo and snapping turtle stock.
The classic illustration by David Sutherland was subsequently used as the frontispiece for the AD&D Monster Manual (1977).
The Dragon #2 (August, 1976): The Remorhaz 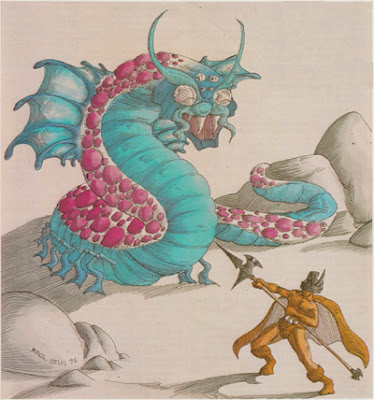 The Remorhaz, illustration by Erol Otus.
The remorhaz was created by Rob Kuntz, likely after Remora, a creature from "The Lair of the Ice Worm", by L. Sprague de Camp and Lin Carter, published in "Conan of Cimmeria" (1969).
The illustration by Erol Otus was his first published colour piece, according to an interview in 2009, here.  The remorhaz makes an appearance in module G2: The Glacial Rift of the Frost Giant Jarl.
The Dragon #5 (March, 1977): The Anhkheg 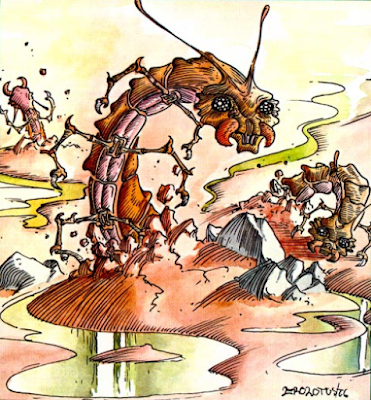 The Anhkheg, illustration by Erol Otus.
The anhkheg, a fearsome burrower, was created by Erol Otus, according to an interview in 2009, here.  It appears to have been modeled somewhat after a form of giant beetle.
The Dragon #6 (April, 1977): Death Angel
The death angel was created by John Sullivan.  Unlike previous "creature features", it was not included in the 1e Monster Manual, probably because the book had already gone to press.
A highly imaginative creature, the death angel shares characteristics with other undead.  This is a great OD&D monster to use, as it is fairly obscure.
John Sullivan also illustrated the covers of The Dragon #10 and #17.
The Dragon #7 (June, 1977): The Prowler 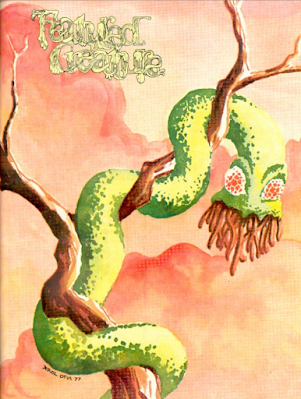