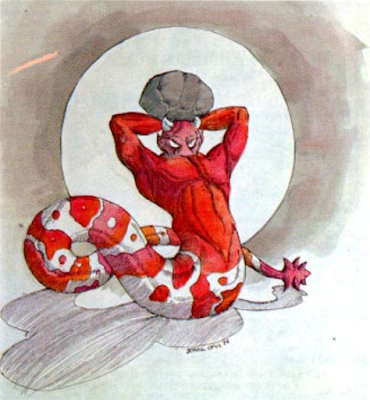 Illustration by Erol Otus
I would have called this creature something like a "Dust Devil".  It appears to be able to hurl boulders, like a giant, and wield its tail, like a mace, in battle.
The Dragon received almost 100 entries.  The winner and runners up were announced in The Dragon #13 (April, 1978):

The complete write-ups, together with honorable mentions, were published in The Dragon #14 (May, 1978).
Creature Feature Contest #2 "Paint that Monster"
The second contest involved either drawing or painting a creature described in an excerpt from Fritz Leiber's "The Bleak Shore"
The winners were published a year later, in The Dragon #24 (April, 1979): 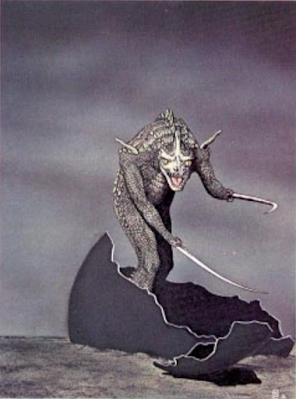 The two creatures which emerged in the gathering dusk held enormity even for the Mouser’s drugged mind.  Shambling things, erect like men but taller, with reptilian heads boned and crested like helmets, feet clawed like a lizard’s, shoulders topped with bony spikes, fore-limbs each terminating in a single yard-long claw.  In the semidarkness they seemed like hideous caricatures of fighting men, armored and bearing swords.  Dusk did not hide the yellow of their blinking eyes...