In the forward to Men & Magic, volume 1 of the original Dungeons & Dragons rules (1974), Gary Gygax wrote:


From the map of the "land" of the "Great Kingdom" and environs -- the territory of the C & C Society -- Dave located a nice bog wherein to nest the weird enclave of "Blackmoor", a spot between the '''Great Kingdom" and the fearsome "Egg of Coot".

In February, 2017,  David Megarry shared a copy of an old map of the land of the Great Kingdom, upon which locations for Blackmoor and the Egg of Coot are indicated: 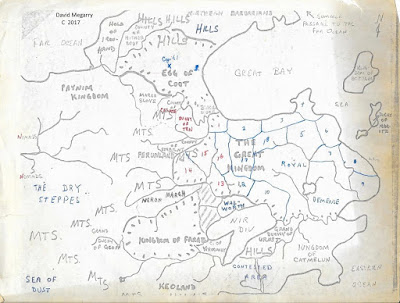 Zenopus Archives provided an in-depth analysis of the map, here.  Jon Peterson was able to confirm that Megarry's map is a later version of the map of the Great Kingdom from Domesday Book #9, and that other maps exist, depicting the location of Greyhawk, (see comments, here).

The new documentary Secrets of Blackmoor (2019) describes the fascinating process by which gaming in the Twin Cities evolved from Napoleonic miniatures, to multiplayer Braunstein games run by Dave Wesely, to the Blackmoor campaign, run by Dave Arneson.

In Playing at the World (2012) writer Jon Peterson makes a good case for Arneson's first "Blackmoor" session to have been in April, 1971.  Players used their Napoleonic characters, (perhaps after having been transported to Blackmoor through a cave in Iceland).

At the time, local wargamer Greg Scott endorsed a rival Napoleonic campaign under Randy Hoffa.  Arneson responded by casting both as imaginary villains (the "Egg of Coot" and "Ran of Ah Foo") in a medieval "Braunstein"-style game incorporating elements from Chainmail.

Peterson writes that players were tasked with defending the town of Blackmoor from the forces of the Egg of Coot, after the defection of the Baron of Blackmoor (named "The Weasel" in reference to Wesely, who was on military duty from 1970-73, and so never actually played the character).


The Baron Fant was placed in command of Blackmoor Castle after his successful operations during the first Coot invasion.  His nearest neighbor is Sir Jenkins who rules the northern most march of the Great Kingdom which rests on the actual frontier with the Egg of Coot.  Sir Jenkins prior to the honors bestowed upon him from the first Coot invasion was a noted bandit, driven to that extreme by the former ruler of Blackmoor, "the Weasel".  To firm the alliance of Fant and Jenkins, a marriage was arranged between them with Jenkins wedding Fant's cousin and Fant marrying one of Jenkin's relatives.

Excerpt from "The First Fantasy Campaign" (1977) by Dave Arneson

Arneson chronicled the happenings of his Blackmoor campaign in The Corner of the Table  newsletter.  A summary of these would some day make for fascinating reading.  He circulated the first issue of The Blackmoor Gazette and Rumormonger in late fall, 1971.

Note that in the BGaR #1, it's stated that Baron Jenkin's wife is the sister (not cousin) of the Baron Fant.  "The First Fantasy Campaign" was compiled and published years after the original Blackmoor sessions, and inconsistencies may have therefore crept in.

Update (May 11, 2020):  The numbered regions on Megarry's map probably correspond to a key labeled "Great Kingdom Forces" in Rob Kuntz's "El Raja Key Archive", as emerged in a thread over at "The Comeback Inn" last week.  I plan to investigate further, as soon as I'm able.

The next major phase of the campaign involved exploration of Arneson's original six-level dungeon beneath Blackmoor Castle, as evidenced by a shift in the focus of the next issue of the BGaR.  Megarry based his innovative boardgame "Dungeon!" on this aspect.
at October 26, 2019
Email ThisBlogThis!Share to TwitterShare to FacebookShare to Pinterest
Labels: Blackmoor, The OD&D Game World