Geomorphs of the Mad Archmage

The 1977 Basic Set included Dungeon Geomorphs Set One: Basic Dungeons (which appear to have originally been released separately, the previous year) as well as Monster & Treasure Assortment Set One: Levels One-Three, for stocking purposes. 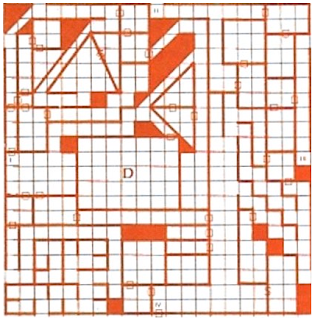 My first exposure to these products was through the later compilations, Dungeon Geomorphs Set One to Three, and Monster & Treasure Assortment Sets One-Three: Levels One-Nine.  I tried using them to create a few dungeons, but was never entirely satisfied with the results.

I think the reason for this was that I didn't fully appreciate these products for what they truly were - components for a Gygaxian megadungeon, modeled after Greyhawk Castle itself, as discussed here and here on the Random Wizard blog, in 2013.

Dan Collins posted an excellent analysis of the first dungeon level beneath the ruins of Greyhawk Castle, about a year ago.  An example such as this back in the day would have provided welcome guidance for using Dungeon Geomorphs to create a megadungeon.

While a classic sample cross section of levels was depicted in OD&D vol. 3, a full megadungeon level never was.  Instead, the types of sample dungeons published were smaller, self-contained affairs (see this list of early sample dungeons for examples).

The individual Dungeon Geomorph sets, in addition to the later compilation set, each include some intriguing encounter key examples, which, as Allan Grohe notes, might have been drawn from Gary Gygax's home campaign.

Rob Kuntz's El Raja Key and the subsequent expanded version of Greyhawk Castle are the types of megadungeons that Dungeon Geomorphs were intended to construct.  (Zach Howard discusses a later, similar dungeon by Gygax in this post.)

It was left to Mike Carr to develop an introductory megadungeon, but in so doing, he incorporated more logical design elements.  This "second generation" megadungeon woiuld ultimately be published as module B1: "In Search of the Unknown".