The original "sample cross section of levels" appearing in the Holmes manuscript was three levels deep, as revealed here at Zenopus Archives.  (The published version of the Holmes Rulebook replaced this with an iconic illustration by Tom Wham). 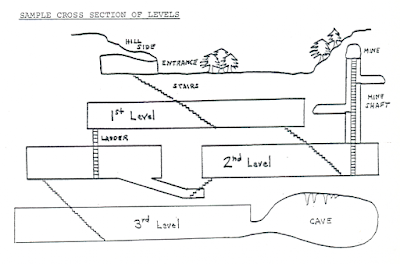 Holmes shared his concept of the Underworld in "The Maze of Peril":

Somewhere beneath the surface of this ancient land the tunnels and corridors of some prehistoric race coiled and raveled, delved, and probed unimaginable depths into the core of the world.  Corridors of wealth, they were also tunnels of deadly peril, for many of the rash adventurers who set forth for the secret entrances to the fabled Underworld were never heard from again.

What race or races had built the original maze no one knew.  It seemed, in the opinion of the sages and magicians of the time, that there must have been many layers of dungeons and underworlds laid down, one atop the other, as the world crust was formed, so that now no one knew, or even guessed, how many levels it extended below the surface.

I ordered "The Maze of Peril" from the Space & Time website, years ago (they probably still have copies, although the novel is available from other online booksellers, as well).  An alternative is the highly recommended anthology "Tales of Peril" (available here).

I like the idea of entrances to the underworld in mundane places, such as the mine in Holmes' cross section of levels, or the base of a hollow trunk in The Dungeons of the Ground Goblins (a mini-dungeon from 1976).