The "sample cross section of levels" within the Holmes Basic Rulebook presents an endless source of fascination.  (I can vividly remember when I first glimpsed the illustration, which is all it usually takes to become seared into the mind's eye). 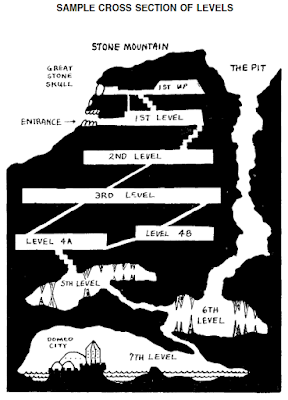 Zach Howard posted about a similar Great Stone Skull in "Shadows in the Skull", a Conan story by L. Sprague de Camp and Lin Carter (originally published in Fantastic (Feb, 1975) vol. 24, no. 2, and downloadable here).
Having read the story, which features a Great Stone Skull carved into the chalk-white face of a mountain-side, with access to a small cave-city, I feel it's possible that Wham was inspired by it.  (I hope to get the chance to ask him).
Adam Dickstein shared his memories of a D&D campaign based around Wham's sample cross section, here.  Jeff Sparks published his version as a 36-page pdf, illustrated by Andy "ATOM" Taylor and Steve Zieser (and reviewed at Grognardia, here).

A modified illustration of "The Pit" created for one of my campaigns (you can read a brief summary of the adventure, here).

Like many of us, I came up with my own version for stocking this dungeon:
My theme for the 1st level was "In Search of the Unknown".  The PCs discover the remnants of an abandoned shrine to some dark, forgotten power, with a few remaining active traps.  Wandering monsters include goblinoids from the 2nd level.
I envisioned the 2nd level as a humanoid lair, a hobgoblin king's domain (shamelessly using the map of the 2nd level from module B5 "Horror on the Hill").  The PCs need to change tactics, given that the hobgoblin king's forces are well-organized.*
*on return expeditions to the dungeon, hobgoblin sentries positioned in the eye sockets of the Great Stone Skull shoot arrows at approaching enemies, and use the vertical shaft as a murder hole, dropping rocks and flaming oil
The 3rd level is a mazelike necropolis, filled with tombs of some forgotten race, and crawling with undead.  It's avoided by the hobgoblins, who barricade all access to and from the level if the PCs descend, trapping them below.

Levels 4A and 4B are the tombs of evil priest-kings, devoted to the worship of dark, ancient powers.  Mostly untouched, there are several active traps, but also great wealth and powerful magic items to be discovered.
The 5th level is a natural cavern with medusae and fire-breathing hydras.  The statues of several petrified adventurers can be returned to flesh, providing some powerful NPC allies (and replacements for dead PCs).
I used the map of the Grand Cavern from module D1 "Descent into the Depths of the Earth" in place of the 6th level, with access to the surface world through "The Pit".  I had to restock many of the encounters, but you don't have to.

Finally, the Domed City upon an island in the subterranean lake on level 7 is inhabited by mind flayers, from The Strategic Review #1 (a kind of "city" in the sense that the Acropolis is a "city", a collection of temples for worshippers).
at February 07, 2021

Email ThisBlogThis!Share to TwitterShare to FacebookShare to Pinterest
Labels: Holmes