The section "Blackmoor Dungeons" is followed by "The Dungeon Levels" with maps and keys for levels 1-10.  Arneson states "These maps comprise the ones used over the first five years, and at various conventions around the country over the last two years."

Interestingly, only about 1/6 of rooms on the 1st level are occupied, increasing to 1/3 of rooms on the 3rd level, and 1/2 of rooms from the 7th level onwards, which seems appropriate for a dungeon complex beneath an active frontier town.

Levels 1-3 are built into the hill upon which Blackmoor Castle stands.  Levels 4 and 5 are connected to a series of tunnels and caverns that extend beneath the Town of Blackmoor and beyond.  The remaining levels continue straight downwards. 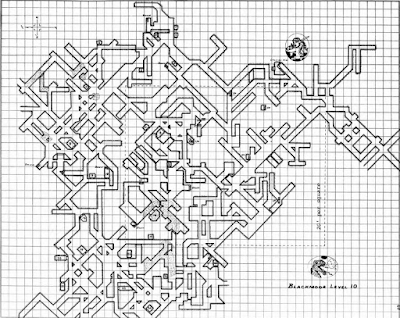 Blackmoor Dungeons, Level 10, from JG 37 "The First Fantasy Campaign" by Dave Arneson.  Note the "Orcian Way" in the upper right.

Arneson's maps are fascinating to examine, and represent a truly labyrinthine underworld.  Daniel Boggs describes Blackmoor Dungeon Map Oddities in relation to how doors and secret passages are indicated, over at his blog.

All stairs are circular stairways, descending 20-30 feet from level to level.  There are several stippled areas designating cave-ins, likely dating from the great earthquake that leveled the castle mid-way through the first year of the original Blackmoor campaign.

Arneson mentions cross-hatched sections* representing "deep flue-like chimneys that go into the deepest regions of the Dungeon to connect with the great lava pit beneath the Castle (level 25)."  These are circled by low railings and sometimes adorned with religious images.

*I don't see any cross-hatched sections on the maps, but several areas on levels 6-8 are labeled as "fire pits".

Round black dots and black squares* designate "Devil Fountains" made of an obsidian material with "Ruby eyes, Gold horns, Silver accoutrements and spewing out sulphuric acid."  Tampering with these will trigger a great howling sound and earth tremors.

*These seem to be mostly present on level 9.

For an amazing look at maps of Blackmoor Dungeons drawn by David Megarry, one of the players in the original Blackmoor campaign, check out The Oldest Dungeon Maps in D&D History and Monster lists and Megarry's Maps over at "Hidden in Shadows".
at October 11, 2020