The road to the northwest out of the Town of Blackmoor leads to the Barony of Glendower, the northernmost march of the Great Kingdom, resting on the actual frontier with the Egg of Coot, where it is indicated on most maps.

Glendower was ruled by Sir Jenkins, a noted bandit prior to the First Coot Invasion, driven to that extreme by the former Baron of Blackmoor, "the Weasel".   Later on, Sir Jenkins was bitten by a vampire while exploring the Blackmoor Dungeons. 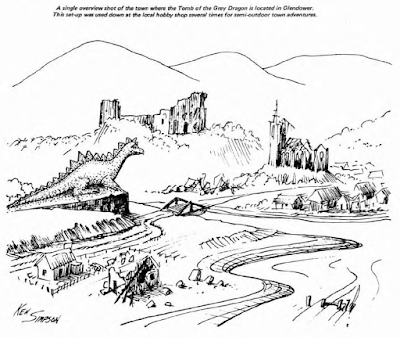 The town of Glendower (right), with the Tomb of the Grey Dragon in the foreground (left) and what appear to be the ruins of a castle in the background (center).  Illustration by Ken Simpson, from JG 37 "The First Fantasy Campaign" by Dave Arneson.

In addition to the sprawling Blackmoor megadungeon, "The First Fantasy Campaign" also contains a page of maps and a stocking list for the much smaller "Glendower Dungeons", consisting of a mere 4 unfinished levels.

Superimposed levels of the Glendower Dungeons, by David "Zimri" Ross, posted at the Blackmoor Archives, here.

We know little else about the Glendower Dungeons, although they would certainly make for a great introductory adventure when starting a Blackmoor campaign.  I envision them beneath the ruins of the castle depicted in the illustration, above.