For my part, I'll be wrapping up my look at the Blackmoor section of JG 37 "The First Fantasy Campaign" with an overview of Blackmoor Castle.

We begin with a brief description of the castle's history, which mentions the threat of barbarian invasion out of the north, (reminiscent of the backstory to module B1 "In Search of the Unknown" by Mike Carr, one of the original Blackmoor players). 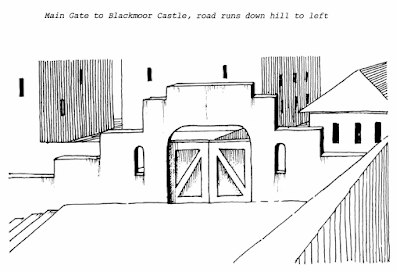 Main Gate to Blackmoor Castle.  Illustration by Ken Simpson, presumably based on the original by Dave Arneson.

The next section describes locations within the castle, such as the Black Hall, the Catacombs, and Blackmoor Tower.  The accompanying map is unkeyed: 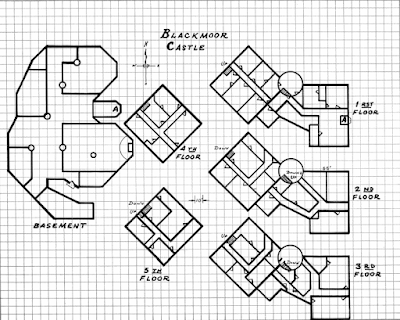 Map of Blackmoor Castle, from JG 37 "The First Fantasy Campaign".  For a later version, drafted for Origins 1984, see this post from chirine's workbench.

The Black Hall (No.1):
The main reception hall (presumably the largest room on the 1st floor), although renamed after a gruesome incident "during the Second Coot invasion some 40 years ago".
The Second Coot invasion occurred at the end of the first year of the original Blackmoor campaign, which suggests that this section was written after the original campaign had drawn to a close in late 1975, or during Arneson's time in Lake Geneva in 1976.
The Catacombs (No. 2):
The tunnels and galleries dug into the hill beneath Blackmoor Castle, with short descriptions for notable locations including:

Check out Mapping the Entrances to Blackmoor Dungeon for a discussion of how the castle floorplan lines up with the dungeon, below.
The Tower:
Also known as "The Bloody Tower", "The Terrible Tower", and/or "The Wizard's Tower", and inhabited by the assorted spirits of past rulers.  Haunted rooms include: