Dave Arneson, co-creator of the Dungeons & Dragons game, parted with TSR in late 1976.  Jon Peterson recently posted about Arneson's D&D tournament at Origins 77.  Arneson was also scheduled to run at least one session of "Don't Give Up The Ship" at Gen Con X in August, 1977.

In the meantime, Arneson self-published the "Dungeonmaster's Index" and, perhaps disappointed with how OD&D supplement II: Blackmoor had turned out, was working with Judges Guild to publish his extensive pre- and post-D&D Blackmoor campaign material. 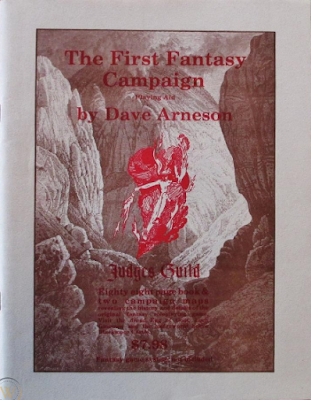 Although not appearing in the credits, "The First Fantasy Campaign" was edited by Bill Owen, co-founder of Judges Guild.  The 1st and 2nd printings were 96 pages.  The 3rd printing appears to have been re-typeset and was shortened to 64 pages, (see The Acaeum for details). 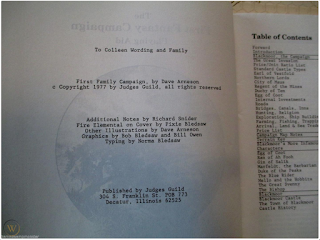 Interior of the 1st printing of the First "Family" (Fantasy) Campaign.  Note that section headings in the Table of Contents are underlined.

Arneson dedicated "The First Fantasy Campaign" to Colleen Wording and Family (spelled "Wordem" in the 3rd printing) although I'm not sure who Colleen was, or which spelling is correct.
Interior illustrations are credited to Dave Arneson in the 1st printing, and to Ken Simpson and Dave Arneson in the 3rd.
Update (Sept 9): Havard sheds light on the illustrations in this thread over at The Comeback Inn

"The First Fantasy Campaign" is a treasure trove of material.  However, as has frequently been stated, it could have been better organized, starting with the Table of Contents.  That section headings were not underlined in the 3rd printing further compounds the issue.
Here is a comprehensive listing of the Table of Contents:

Although I am not an expert in Blackmoor, I will endeavor to cover each of these sections in turn over the coming months, with links to relevant posts and discussion that has appeared across the internet in recent years.  Please join me, and be sure to add your own two cents!
at September 05, 2020