The D&D Tournament at Gen Con X in August, 1977 was organized by Bob Blake.  All three rounds were published by Judges Guild as JG #80 "Of Skulls and Scrapfaggot Green" (1979) with illustrations by Sheryl England, and reprinted in 1980 with a new cover by Kevin Siembieda. 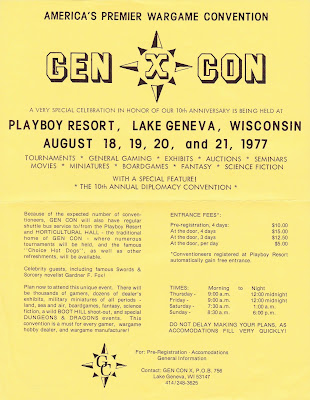 Gen Con X was a watershed event.  It was held at the Playboy Resort in Lake Geneva, now the Grand Geneva Resort & Spa, the present venue for Gary Con.  Special guests included Fritz Leiber, Harry Fischer, and Gardner Fox (the Guest of Honor), as per Tim Kask's editorial in The Dragon #8.  A con report was published in The Dragon #10.

According to the program:*

The convention's biggest tourney begins on Friday morning when the 180-player Dungeons & Dragons tournament starts at Horticultural Hall.  This is the first of three days of playdowns under the aegis of Bob Blake and a host of Dungeon Masters.  As the tournament progresses and the field narrows, the contending teams will venture through a town adventure, a dungeon adventure, and a wilderness outing, with one team emerging as victors on Sunday.

*for a look at some pictures of the program, check out Zenopus Archives.

The first round was scheduled to begin at 10 am on Friday, August 19, at Horticultural Hall in downtown Lake Geneva.  Approximate running time was 8 hours, and players on the winning teams each received $10.00 gift certificates.  Rounds two and three were also scheduled to begin at 10 am at Horticultural Hall, on Saturday and Sunday, respectively. 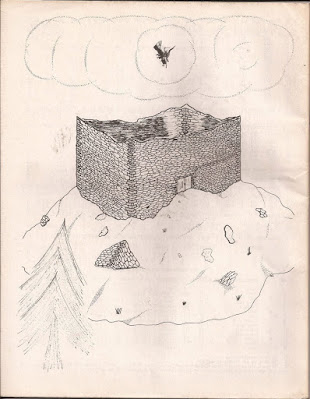 Back cover to JG #80 "Of Skulls and Scrapfaggot Green" (2nd printing), depicting the ruins of Akbeth's Tower.

I subsequently ran Part One "The Key to Akbeth's Tower" at Gary Con XI in 2019, (which included a knife fight in the bazaar) and was all set to run Part Two "The Skull of Vruna" at Gary Con XII, this past March, before it was canceled, due to the Covid-19 pandemic.  I plan to reschedule Part Two, if Gary Con is held next year, followed by Part Three the following year.

I'm not sure whether this scenario was drawn from Bob Blake's home campaign, which was apparently inspired by Celtic mythos.  There doesn't seem to be much that connects the Gen Con IX and Gen Con X dungeons.  Although it works well as a standalone, I've considered substituting "The Forbidden Lands" in place of the Iberian peninsula, in the OD&D game world.

at August 29, 2020
Email ThisBlogThis!Share to TwitterShare to FacebookShare to Pinterest
Labels: The OD&D Game World