Gary Gygax explored concepts regarding the outer planes in tandem with expansion of the alignment grid, in his article "The Meaning of Law and Chaos in Dungeons & Dragons and Their Relationships to Good and Evil" from The Strategic Review #6.

These ideas were further developed in his article "Planes: The Concepts of Spatial, Temporal, and Physical Relationships in D&D" published in The Dragon #8 (July, 1977), in which the number of outer planes was expanded from 8 to 16, as depicted in this diagram.

The 5th level magic-user spell contact higher plane "allows the magical-type to seek advice and gain knowledge from creatures inhabiting higher planes of existence" from as low as the 3rd to as high as the 12th "plane of existence".

The 2nd presumably represents the astral plane, while a story by L. Sprague de Camp might have suggested the upper limit of a 12th plane, as discussed over at Delta's D&D Hotspot in this post back in 2014.

The 5th level cleric spell commune "puts the Cleric in touch with the powers “above” and asks for help in the form of answers to three questions."  wherein the cleric communicates directly with his or her own deity/pantheon.

The Greyhawk supplement introduced the 9th level magic-user gate spell, which "opens a cosmic portal and allows an ultra-powerful being (such as Odin, Crom, Set, Cthulhu, the Shining One,* a demi-god, or whatever) to come to this plane."

*from A. Merritt's "The Moon Pool"

The Outer Planes:
In The Dragon #8, Gygax stated that "The Outer Planes are a collection of the religious and/or philosophical goals (or anti-goals) of mankind and “the other intellectual species”. 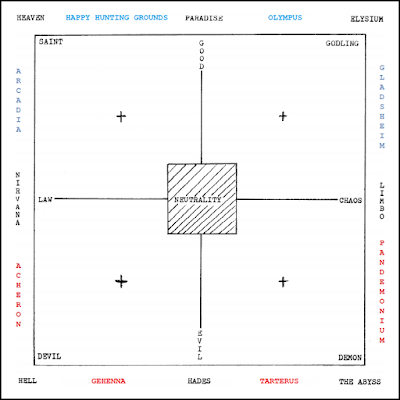 In his article from The Strategic Review #6, Gygax stated:

The player-character who continually follows any alignment (save neutrality) to the absolute letter of its definition must eventually move off the chart (Illustration I) and into another plane of existence as indicated.

In The Dragon #8, travel between the outer planes was described:

The Astral Plane can be used to travel from plane to plane, ie. from Heaven to Elysium. A traveler could also move into an adjacent Plane, ie. Heaven to the Happy Hunting Grounds, just by walking. Travel, by walking, could or should be limited to only one Plane to either side of the Plane that the traveler started in. For example, a traveler Astral Planed into Nirvana, so by walking he could travel to Arcadia or to Acheron.

The name of this outer plane was changed from "Heaven" to "the Seven Heavens" in The Dragon #8.

A concept with its origins in Near-Eastern/Mesopotamian (Sumerian, Babylonian, Canaanite) religions, also reflected in Judeo-Christian and Hindu writings.

The afterlife of the Great Plains tribes of the American Indians, added in The Dragon #8.

The Happy Hunting Grounds were later shifted to the right, from in between lawful good/neutral good to between neutral good/chaotic good, in the AD&D 1e Players Handbook.

The name of this outer plane was changed from "Paradise" to "the Twin Paradises" in The Dragon #8.  There are two types of paradise in Judaism.

The Twin Paradises were later shifted to the left, from the neutral good position to between lawful good/neutral good, in the AD&D 1e Players Handbook.

Home of the Olympian gods, added in The Dragon #8.

Olympus was later shifted to the right, from in between neutral good/chaotic good to the chaotic good position, in the AD&D 1e Players Handbook.

Elysium was later shifted to the left, from the chaotic good position to the neutral good position, in the AD&D 1e Players Handbook.

*10-14 are the "higher" planes, but Gygax avoided use of Judeo-Christian angelic beings, turning instead to the devas of Hinduism (in Dragon #63), and the planetars and solars of Theosophy (in Dragon #64).

The realm of Asgard, Valhalla, and Vanaheim, added in The Dragon #8.

Most of the Aesir live in an area of the plane of Gladsheim known as Asgard, which is connected to the Prime Material Plane by Bifrost, the Rainbow Bridge. (Bifrost is kept well hidden, and few mortals have ever pierced the veil of illusion which hides it.) Asgard includes Odin's court of Valhalla, the various holds of the gods, and large expanses of wilderness and sea. It is adjacent to the blighted land of Jotunheim, the giants' home, an anomalous blot of evil upon the plane of Gladsheim.

Not the limbo from Catholic theology, but rather "the plane of ultimate Chaos (entropy)"

From The Strategic Review #6:

Considering mythical and mythos gods in light of this system, most of the benign ones will tend towards the chaotic/good, and chaotic/evil will typify those gods which were inimical towards humanity. Some few would be completely chaotic, having no predisposition towards either good or evil — REH’s Crom perhaps falls into this category.

Perhaps inspired by the capital of Hell in Milton's "Paradise Lost", added in The Dragon #8.

From wikipedia "the abyss was often seen as a prison for demons."

Bearing similarities to the abyss, from Greek mythology, added in The Dragon #8

The underworld, from Greek mythology.

Bearing similarities to Hades, a biblical reference, added in The Dragon #8.

Inspired by the nine circles of Hell in Dante's Inferno as mentioned in this post from the Q&A thread on EN World.

A river in Hades, added in The Dragon #8.

(Also an ancient kingdom in the Hyborian age).

Not a state of mind, but rather "the plane of ultimate Law".

The home of the god Pan in Greek mythology, added in The Dragon #8.

The Birth of AD&D:

As of this writing I foresee a number of important things arising from the adoption of this system. First, it will cause a careful rethinking of much of the justification for the happenings in the majority of D&D campaigns. Second, it will vastly expand the potential of all campaigns which adopt the system — although it will mean tremendous additional work for these DMs. Different planes will certainly have different laws and different inhabitants (although some of these beings will be familiar). Whole worlds are awaiting creation, complete invention, that is. Magical/technological/whatever items need be devised. And ways to move to these planes must be provided for discovery by players. Third, and worst from this writer’s point of view, it will mean that I must revise the whole of D&D to conform to this new notion. Under the circumstances, I think it best to do nothing more than offer the idea for your careful consideration and thorough experimentation. This writer has used only parts of the system in a limited fashion. It should be tried and tested before adoption.