There is mentioned in certain books and scrolls of arcane lore a philosopher from the East named Fu Hsi. Fu Hsi’s lifework was devoted to understanding and traveling through the Astral Plane. Two famous treatises on the Astral Plane & Astral Travel credit Fu Hsi with the rediscovery of, as well as extensive mapping of, the Astral Plane.

from a campaign scenario by Tim Kask

Concepts regarding the astral plane date back to antiquity, although Gary Gygax and Tim Kask were primarily influenced by Dr. Strange. 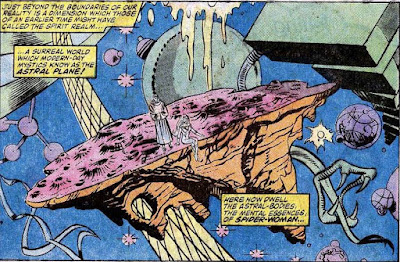 Depiction of the astral plane in the Marvel Universe, from a panel in The Avengers #240 (February, 1984).  Pencils by Al Milgrom, inks by Joe Sinnott, colors by Christie Scheele, letters by Jim Novak.

Astral projection in OD&D was first described in the Greyhawk supplement.*  The 9th level magic-user astral spell "allows the user to send his astral form, undetectable to all but others on the astral plane, from his body to other places."
*as discussed in this post on DM David's blog

The concept of astral travel was further developed in Eldritch Wizardry, in the description for the psionic ability "Astral Projection":

Dangers are basically twofold: First, it is possible to meet some creature which can operate in the astral plane (demons do so, medusae and basilisks gaze into it, etc.). Secondly, the astral body is attached to the physical body by a silver cord.* If this cord is broken, then the body and the astral body are dead.

*the silver cord is a metaphysical concept, with biblical origins.

Eldritch Wizardry also makes reference to the hazards of the psychic wind:

Blowing away snaps the silver thread. Losing 1–10 days occurs when the attempt fails, and the astral body is slingshotted in, instead of out. 1–100 days will be lost through this mind wrenching disorientation.

In his article "Planes: The Concepts of Spatial, Temporal, and Physical Relationships in D&D" from The Dragon #8, Gygax states that the Astral Plane is the means of transportation from the Prime Material Plane to the Outer Planes:

1) The traveler must be in the Prime Material in order to travel into the Astral. The Astral can not be reached from the Elemental, Positive or Negative Planes.

Roger Moore further described the astral plane in an article in Dragon #67, triggering an influx of mail, which resulted in a column in Sage Advice devoted to the subject, in Dragon #71.