OD&D cosmology evolved in a step-wise fashion, something which Gary Gygax attempted to summarize and expand upon in his article "Planes: The Concepts of Spatial, Temporal, and Physical Relationships in D&D" published in The Dragon #8 (July, 1977).

OD&D cosmology depicted as "a 2-dimensional diagram of a 4-dimensional concept" from The Dragon #8 (July, 1977).

The only previous reference to the Prime Material Plane in OD&D was as "the physical plane" in Eldritch Wizardry.

The Ethereal Plane "co-exists in exactly the same space as the Prime Material Plane."

The concept of etherealness, or going "out of phase" was introduced in the Greyhawk supplement (March, 1975) with the 7th level magic-user spell "phase door", the monster description for the phase spider, and three new magic items:

Phase Door: A spell which causes an invisible door to open for the caster. This door is exactly similar to a Passwall except that it is invisible and only the magic-user who cast the spell can use the door.

Phase Spiders: When attacking or being attacked, the Phase Spider is able to shift out of phase with its surroundings, bringing itself back only when it is ready to deliver its poisonous bite. When out of phase they are impervious to nearly all forms of attack, although a Phase Door spell will cause one to remain in phase for 7 melee rounds. Oil of Etherealness and Armor of Etherealness also put their wearers into the same phase as this monster when it shifts out of phase.

Armor of Etherealness: The most magical of all forms of armor, this suit of plate allows the wearer to take either of two options: 1) he can wear it as normal +3 armor; or 2) he can decide to become ethereal. In the latter case he can move through solid objects and is subject to attack only by those creatures which are able to also become out of phase and spells such as Phase Door will negate the etherealness of the armor. Attacks while ethereal are not possible.

Dust of Appearance: When thrown into the air it will cause any invisible or displaced or out of phase or astrally projected figure to become totally and completely visible for 12 turns.

Becoming ethereal in terms of the Greyhawk supplement therefore seems to indicate a change in physical state, rather than existence on another plane.

Ghosts were described as being non-corporeal "they can only be attacked by things in a like state (such ethereal creatures) or through telepathic means."  Their touch "causes aging of from 10 to 40 years, but in order to do this they must assume a semi-corporeal form, and when they do so they may be attacked by magic weapons (but not spells) as if they were Armor Class 0."

Likewise, the entry on wind walkers states "Being ethereal, Wind Walkers can be fought only by such creatures as Djinn, Efreet, Invisible Stalkers, or Aerial Servants..."  In OD&D volume 2, Djinn are described as "aerial creatures" and Efreet "are similar to the Djinn, but their basis is in fire".  As with ghosts, wind walkers are "subject to attack by telepathy."

Eldritch Wizardry (May, 1976) makes the first mention of the astral and ethereal planes, with wandering monster tables for both astral and ethereal encounters, depending on whether checking in the underworld, the outdoors, or in space (astral only).

For the psionic ability "Etherealness":

Ethereal individuals are affected by the psychic wind (detailed under astral projection) as follows: There is a 1% chance that this wind will blow, and this must be checked each turn the individual is in ethereal form. If it does blow, the ethereal individual will not be killed, but the chance for him becoming lost is double, but at that point there is no longer any expenditure of psionic strength points to remain ethereal, for the individual is lost on the plane and will remain so for the amount of time decided by the dice roll.

Creatures with petrification ability (cockatrices, basilisks, medusae, gorgons, catoblepas) exist simultaneously on the astral, ethereal, and physical planes.  Petrification slays on the astral plane, and turns victims into "ethereal stone" on the ethereal plane, (invisible to those on the prime material plane).

Couatl, kirin, shedu, intellect devourers, cerebral parasites, and thought eaters can likewise travel on both the astral and ethereal planes.  Additional encounters may involve a lich (with access to magic-user spells), phase spider, or blink dog (which is possibly where blink dogs disappear to when they blink out, but don't return?)

Finally, and most frighteningly, "Demons frequently roam the astral plane. Their attention is also attracted by persons in an ethereal state. Check normally for wandering monsters, assuming a 10% chance of a demon appearing if a wandering monster is indicated."

Although the astral and ethereal planes are supposed to be non-contiguous, a demon's ability to gate presumably bypasses this restriction.  But how is their attention attracted in the first place?  Frank Mentzer offered an explanation in this thread:

A long, long time ago I decided that any being entering the Ethereal or Astral planes causes a reverberating "bloink" at the point of transition. This effect ripples away through the plane, can easily be traced to the cause, and will (100% chance) attract something. The variables are how far away and what exact creature(s).

Even on the Prime Material Plane, the threat of demons is very real:

If the name of a particularly powerful demon is spoken there is a chance that he will hear and turn his attention to the speaker. A base 5% chance is recommended to the referee. Unless prepared to avoid such attention—or to control the demon—the demon will thereupon immediately kill by whatever means are most expeditious the one pronouncing his name.

In his article in The Dragon #8, Gygax states that the Ethereal Plane is the transportation “system” of the Inner Material Planes:

Travel into the Ethereal is always of a magical nature by using spells or special artifacts. The Oil or Armor of Ethereal, a Wish and the new Vanish* spell can be used.

When asked to describe the connection between the ethereal and prime material planes, in this thread Gygax provided the following response:

Those on the Ethereal Plane are able to see the PMP vaguely, as if through a thick haze or several layers of gauze. Assume vision extends out to a maximum of 30 feet, although movement of large objects could be noted at 60 feet distance.

Since ethereal characters cannot physically touch anything on the prime material plane, movement is affected.  Gravity probably doesn't apply, so characters would also feel weightless.  Deities and Demigods (1980) later specifies that movement needs to be willed and requires concentration.

The Positive and Negative Material Planes:

In his article in The Dragon #8, Gygax introduces the concept of positive and negative material planes:

...creatures which can be harmed only by weapons of a special metal (silver, cold iron, etc.) gain this relative invulnerability from having a portion of their existence in either the positive or negative material plane at the same time they exist partially in the prime.

Gygax goes on to postulate that magical weapons exist simultaneously on more than one plane, and that "a sword of life draining ability...operates primarily on the Negative Material Plane"*

*the level-draining ability of certain undead creatures was also linked to the negative material plane in the AD&D 1e Monster Manual, published in 1977 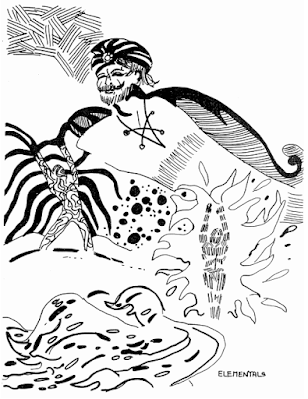 Elementals were originally "created" rather than "summoned".  Their entry in OD&D volume 2 states "Regardless of the strength of an Elemental, only one of each type can be brought into existence during any “day.” Thus, if a character possessed a device to call up an Air Elemental, but before he could employ it an opponent conjured an Air Elemental, another could not be created until the next day."

The invisible stalker spell involved "conjuration of an extra-dimensional monster".  The monster entry for invisible stalkers states "these are monsters created by level 6 spells, uttered directly or from scrolls. They are faultless trackers. They follow continually until their mission is accomplished at which time they return to the nondimension from whence they came."

Steve Marsh developed early concepts regarding the elemental planes.  Much of the Blackmoor supplement incorporated his thoughts for an elemental plane of water, as discussed in this interview.  Marsh envisioned a planar setting with new and unusual aquatic creatures, as well as the magic items necessary for adventurers to operate there.

Concepts regarding the elemental planes were further developed in the article "Elementals and the Philosopher's Stone" by Jeff Swycaffer in The Dragon #27 (July, 1979).