Notes on the Ethereal Plane 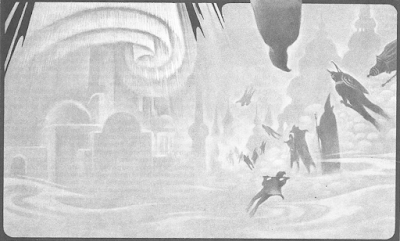 A depiction of the ethereal plane, from the AD&D 1e Manual of the Planes (1987).  Illustration by Stephen Fabian.

From Xylarthren's "Treatise on the Planes"

When anointed with oil of etherealness, the recipient seems to disappear, but does not become invisible in the traditional sense.  Rather, one's physical body and anything worn or carried are transformed into an ethereal state.

The first thing noticed is a floating sensation.  One is surrounded by a thick, grey haze, through which the prime material plane can dimly be perceived.  A vast silence reigns, and sounds originating from the prime are barely heard.

While similar to a terrestrial fog, the ether is neither hot nor cold, wet nor dry.  Breathing and speaking are both possible, and sounds carry long distances.  While objects on the prime can be perceived, they cannot be grasped.

Anything composed of ether appears grey.  This includes the traveler's body and possessions, and also explains why ghosts appear grey.  One's ethereal form does not hunger or thirst, and even minor aches and pains disappear.

Since the ground of the prime material plane cannot be touched, movement on the ethereal plane can only be accomplished through concentration, as with a fly spell, although travelers might be subject to the psychic wind.

Telepathic communication remains possible between sentient creatures on the prime material plane and those on the ethereal plane using ESP, although solid rock up to about 2' in thickness or a thin coating of lead will still prevent its penetration.

Ghosts can be mistaken for other travelers on the ethereal plane, although having once been mortal, their ethereal form is visible to those on the prime as a grey, floating apparition.  In this state, a ghost can pass through walls.

Upon assuming a transitional, partly corporeal form, ghosts are subject to gravity and cannot pass through physical objects, but are able to physically attack those on the prime material plane.  In this form, they are vulnerable to magic weapons.

Phase spiders are native to the prime material plane, although have developed the ability to become ethereal.  They possess a special gland which produces the primary ingredient necessary to create oil of etherealness.

Medusae and other creatures with petrification ability are bound to the prime material plane, but can perceive individuals on the astral and ethereal planes.*  Statues of their victims are sometimes encountered, floating in the ether.

*note - I once read a story in a Weird Tales anthology by H.G. Wells called "The Stolen Body" (originally published in November, 1925) in which the ability to see into another plane of existence was attributed to the "pineal eye"

Thought eaters are unintelligent creatures native to the ethereal plane, although can perceive and feed on mental energy on the prime.  They appear as sickly grey, skeletal, platypus-like creatures with enormous heads and webbed feet.

The greatest threat to a traveler on the ethereal plane is the possibility of encountering a demon.  These extraplanar creatures can sometimes perceive when a traveler from the prime has crossed into the ether, and seek to locate them.