Greg Svenson began as a player with all the others but during the later part of the first year, he really began clicking and had a character that has been in the game ever since that date.  He plays more than most but rather than take great risks, runs to fight another day.  Thus, although incredibly long lived, he is still only 15th level.

In his early days, Greg built a small keep for himself and some friends (all from Carr's FITS society group) and herein are the plans of that edifice.  It was destroyed once (the 2nd time Blackmoor fell) but was rebuilt in total.

Svenson stated "I did the floor plans when I was taking an architectural drafting course in the Spring of 1972." in this thread on the Comeback Inn discussion boards. 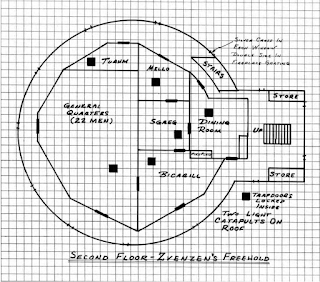 Plan for the 2nd floor of Svenson's Freehold, from JG 37 "The First Fantasy Campaign".  Note "Sgreg" (Greg Svenson's) room in the center.

"Svenson" is alternately spelled "Swenson" or "Zvenson" in many sources.  The Great Svenny's room is depicted in greater detail (rotated by 90 degrees), below: 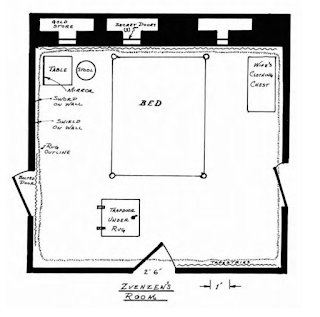 Arneson states "Greg then went on to build Vestfold Dungeon and another complete castle of his own on the Outdoor Survival Board."  Vestfold Dungeon refers to "The Lost Dungeons of Tonisborg" soon to be released by the Secrets of Blackmoor crew.
Dave Arneson might have been referring to the castle on the Outdoor Survival Board, mentioned above, when he stated "Greg is preparing maps etc. of his castle.  Not just the dumpy little freehold in FFC.  He is looking for a publisher." in this post back in 2008.
at November 21, 2020