Continuing our in-depth examination of JG 37 "The First Fantasy Campaign" (1977) by Dave Arneson, the next section begins with a list of Blackmoor's original military forces:

Arneson goes on to describe a few of the events transpiring in the first year of the campaign:

Of note is the fact that Krey turned traitor and joined Soukup (Egg of Coot's Lieutenant) and betrayed the Castle during the first year.  Since the promised evil failed to arrive (they tried taking a shortcut through the Dungeon and well...), he was driven out and fled to the Egg.  Incidentally, some items mentioned have never been found by the players since; the castle was destroyed totally early in the first year (and rebuilt); and the players never got below level nine, except once with the Blue Rider (Heaton).

What follows are brief descriptions of "Blackmoor's More Infamous Characters".  The first five characters and "Final Notes" are listed in a Table of Contents.  The Blue Rider, Mello and the Hobbits, the Great Svenny, and the Bishop appear to have been later additions.

An evil, telepathic entity, whose physical nature is unknown.  Depopulates any area it captures, replacing the former inhabitants with "a new and very unhuman population".

The "Egg of Coot" is a thinly disguised and uncharitable rendition of local wargamer Greg Scott; the Egg's lieutenant "Ran of Ah Foo" is similarly a caricature of Randy Hoffa, the local gamer who instigated a competing Napoleonic campaign in April 1971.  While it is commonly rumored that the negative representation of Scott is owed to his disdain for fantasy wargaming, it must equally reflect Arneson's bitterness over the local power struggle for control of the Napoleonic campaign, as Scott played a large role in those events.

Former servant of the Egg of Coot, now leader of the Duchy of Ten.  10th level Warrior, 10th level Spell Maker, world-renowned Dragon Breeder, and in the process of creating an Android (Zombie?) Army.

Named in reference to Randy Hoffa, as mentioned, above.

Gin of Salik (Wanted by every unwed mother for a thousand miles):

The Gin's great desire in life is to find the famed Pygmalion (see DB) and restore her power among the mortal world.

For more on the Gin's identity and background, see The Gin and Pygmalion, In and Out of Blackmoor posted on Jon Peterson's blog in July, 2017
Marfeldt the Barbarian (either the Greatest Warrior or Curse in the World):

Known to be wandering south of Blackmoor, this creature has wrecked several kingdoms to the east and may be responsible for the divisions in the Great Kingdom.  He suddenly burst upon the world about a year ago when it was said he killed the Wizard that created him during a friendly wrestling match. 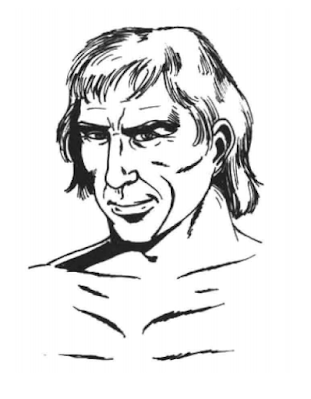 Marfeldt the Barbarian.  Illustration by Jim Holloway, from DA1 "Adventures in Blackmoor" (1986)

Marfeldt was played by Marshall Hoegfeldt, who passed away in January, 2016 (see the OD&D Discussion boards, here and posts on Dragonsfoot, here).

Duke of the Peaks (Lord Whitehead, the Abominable Snowfreak, etc.):

Duke of a very rich and prosperous dominion to the northwest of the Duchy of Ten, who frequently switches allegiance in the wars between the Duchy of Ten and the Egg of Coot.

The story of how the Blue Rider obtained his Sword, Plate Armor, and fully Armored Warhorse concludes with "Others state that the goodies were found beneath the 12th level of Blackmoor Dungeon." recounted, below:

The walls here were rougher and there was a dim red light throughout the corridors. Soon we found ourselves on a ledge over looking a huge cavern with a lake of lava at the bottom. In the center was an island covered with treasure. On top of the mound of treasure was a dragon (I think that it was golden, but the colors meant less at that time).

William wanted to jump down to the island. Svenny was opposed, mostly a self preservation thing. I couldn't see how we would ever get off the island if we managed to get there. William jumped anyway and managed to land on the island. The rest of us stayed on the ledge and watched. Mello took some chalk and wrote "Kilroy was here" along with the famous sketch of the head peering over a wall on the wall of the ledge. The dragon posed a puzzle for William. I don't recall the details, but he solved it and was rewarded with a blue suit of magic armor and mechanical horse. I have always thought of the armor as a dark metallic blue, but the description was just blue. The armor was more like powered battledress then a suit of plate armor, for Sci-Fi fans. William donned the armor and somehow was back with us on the ledge. We all traveled back out of the dungeon.

At this point Dave got busy with something else and asked me to take over as the DM, quickly briefing me on the armor. William and Mello then tried to figure out what the buttons on the left arm of the armor did. It was quite funny for those that were watching and quite frustrating for William as it led to the stories of him charging into battle screaming "No! No! Stop!" later. This is how William of the Heath became known as the Blue Rider.

Greg Svenson, posted at The Comeback Inn (Jan, 2010)
The Blue Rider was played by Bill Heaton.  See also "The Blue Rider" a short conversation with The Great Sveni a.k.a. Greg Svenson by The Fellowship of the Thing (2018)

Mello and the Hobbits:

Mello the Hobbit was 5' 6" owing to his "mixed ancestry".  The ground floor of "Mello's Hobbit House" by Blackmoor's Troll Bridge is also reproduced.  Mello was played by Rick (Mel) Johnson.

The Great Svenny was played by Greg Svenson, who remains fairly active on the internet.

Svenson relates some of the Great Svenny's most memorable adventures in The First Dungeon Adventure, Orcs Bane. and "the bad scene at Lake Gloomy":

Ah, we were all exiled there after we lost the city of Blackmoor to the Egg and the orcs. The change of scenery did us all good, because we had been focusing on Blackmoor and our own personal adventures rather than seeing the "big picture". Svenny died when the Egg of Coot and the Ran of An Foo jointly attacked us. When Svenny charged the hordes of orcs the rest of the guys hung back rather than join him, leaving him to fight some 5,000 orcs by himself. He killed over 200 orcs before he fell. The rest of the guys realized that Svenny couldn't do it by himself and joined in to eventually win the battle. Afterwards, they took Svenny's body to the Bishop, who raised him from the dead. Svenny's lowest moment. Needless to say, I was furious...

It is possible that Arneson is referring to Bishop Carr, the character played by Mike Carr, in this section, but doesn't refer to the Bishop by name.

Mention is made of the Chief of the Nomads, known simply as "The Nomad", apparently played by Dale Nelson.

For additional insights on this section, see Infamous Characters, and the history of levels in D&D, and Did HD equal Level in early Blackmoor? posted by Dan Boggs at Hidden in Shadows.

at September 26, 2020
Email ThisBlogThis!Share to TwitterShare to FacebookShare to Pinterest
Labels: Blackmoor