Continuing our examination of JG 37 "The First Fantasy Campaign" we come to the section describing the Blackmoor Dungeons, a sprawling underworld complex, representing the very first megadungeon in what would become Dungeons and Dragons.

Arneson states "The Dungeon was first established in the Winter and Spring of 1970-71" although later states "Back in 1972, I started doing dungeon explorations with the local gamers building up a set of rules as we went along." in an interview published in Pegasus #1 (April/May 1981).

He mentions "The Castle itself is still blank since it has been destroyed twice and rebuilt twice and then taken over by non-player Elves when the local adventurers were exiled." in reference to events at the close of the first year of the original Blackmoor campaign. 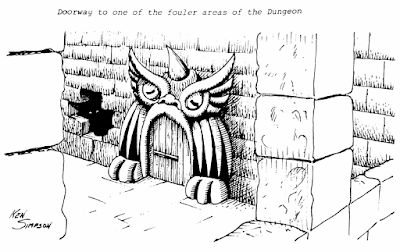 Doorway to one of the fouler areas of the Dungeon.  Illustration by Ken Simpson, based on the original by Dave Arneson.

One of the central features of the Blackmoor Dungeons:

...a great glowing stairway (with Orc Music, Rule Britannia played backwards!), that goes directly from the 1st level to the 10th level magically, although the players seem to be walking down an endless stairway.  Upon entering the stairs, the Orcs, Ghouls, Wraiths, and Balrogs at the bottom are warned of the adventurers approach and composition.  If too strong, the expedition will descend the stairs forever with no apparent way out.  If weak enough, the Orcs and Company, will attack and try to take them all prisoner, sacrificing them to a great feast.  There are two Balrogs, six Wraiths, 200 Ghouls, 50 Ogres and 750 Orcs waiting at the bottom.  They are all that is left of King Funk's Orcs' Grand Army that took Blackmoor.

Should the players ascend the stairway. they will reach the top at about 250 feet where the stairs end in a small room (10' x 10').  In the ceiling of the room is a trap door.  When you open the trapdoor, all you can see is sky and what is apparently a small platform 3' x 3' with a one foot wall around it.  When the players reach this platform they seemingly (to those in the room) continue on through the trapdoor and vanish out of sight.  Actually those that are passing through the trapdoor suddenly find the entire structure (trapdoor. platform. dungeon, etc.) vanishes and they fall towards Blackmoor Bay some 5-100 feet below them.

Originally the Baron Fant, a 9th level fighter played by David Fant, transformed into a "traditional" Slavic Vampire (a "nosferatu" in Mystara terms, as detailed in Gaz 1 "The Grand Duchy of Karameikos") as opposed to a "Hollywood" type.

Interestingly, Sir Fang is noted to have attained 3rd level as an illusionist (introduced in The Strategic Review #4), and 2nd level as a magic-user/anti-cleric, which implies D&D rules, as well as level advancement despite having become undead.

Charged with the care and protection of the area, following the second destruction of Blackmoor Castle.  Those wishing to enter the dungeons beneath the castle must first pass a test of Purity at the foot of the hill.  Each of the entrances and exits are heavily guarded.

Dungeon Map Notes:
Arneson states "All Dungeon Levels and Castle Plans are in scale with each other and will superimpose" something Daniel Boggs has tackled, as described in Aligning the Stairs, Shafts, and Elevators in Blackmoor Dungeon.

Also, be sure to check out Blackmoor Dungeon in 3D an amazing video from the "Secrets of Blackmoor" crew, demonstrating how the dungeon levels align.

Wandering monsters were predetermined per quadrant using the D&D rules for the first six levels, prepared for use at convention games.

Encounters for the lower levels, including the tunnel systems, were those used in the original Blackmoor campaign.  Daniel Boggs explains the Point Buy systems for Stocking Dungeons in another informative post.

For a look at how this all works out in practice, check out The Arnesonian Dungeon posted by Justin Alexander over at his blog.