The Magic Swords of Mythology are varied creatures that can give great power to their owners, who sometimes are helpless without them.  Only Swords have these powerful variations and capabilities.  Other weapons being relegated to lesser bonuses due to their shapes, that do not lend themselves to magical incantations. 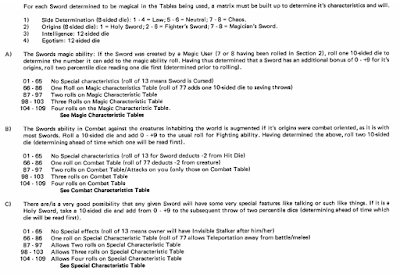 Arneson's matrix to determine a magic sword's characteristics and will, from JG 37 "The First Fantasy Campaign"

The categories "Side Determination", "Origins", "Intelligence", and "Egotism" correspond to the sections "Alignment", "Origin/Purpose", "Intelligence", and "Egoism" in OD&D vol. 2.
"Magic Characteristics" roughly correspond to "Primary Powers" in OD&D vol. 2, although are based on magic-user spells.  Arneson appears to be referring to an early version of the spell tables in OD&D vol. 1 when discussing the spell tables in this section.
"Special Characteristics" include "Communicative Ability" and roughly correspond to "Extraordinary Abilities" but also include a range of impressive "Special Powers" such as conjuring elementals, and even granting wishes.
Arneson concludes with short paragraphs on "Sword Enchantments by Magic Users", "Holy Swords", and "Special Notes":

Special notes for magic swords, including a form of life stealing ability, ultimately resulting in transcendence of the wielder to another plane of existence, and for swords with multiple origins.

The best way to understand a set of tables is to grab some dice and give it a go, and so with that in mind, I rolled up a magic sword from scratch: