The D&D Basic Set was released in July, 1977, representing the first major reorganization of the original D&D rules, but only covering character levels 1-3.  Higher level play still required a copy of the original rules and supplements, which remained available for another few years. 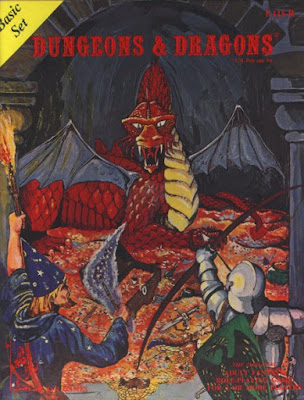 D&D Basic Set (1st printing, 1977).  The painting for the iconic cover illustration by David C. Sutherland III was rediscovered in a warehouse in 2013.

Dr. Holmes was an associate professor of Neurology at the University of Southern California in Los Angeles.  You can find out more about him, here.  The recording of a neurology lecture he gave at a science fiction convention recently surfaced, and can be accessed, here.

Zach Howard posted a fascinating, multi-part, in-depth analysis of the Holmes manuscript, comparing it to the published version of the D&D Basic Set rulebook, in a series of posts over at Zenopus Archives a while back.  Printing history and related info is available, here. 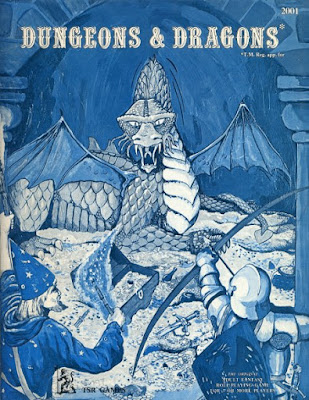 Although various references to AD&D are made throughout the rulebook, the core hardcovers for AD&D 1e had not yet been published, and turned out to be slightly incompatible.  Holmes Basic is therefore regarded as a distinct version of D&D.

My own introduction to RPGs came a few years later, through the 1981 Basic Set, edited by Tom Moldvay, although I remember catching glimpses of the enigmatic Holmes rulebook from time to time, invoking the mysterious origins of the game.

When I started playing D&D with my son, I turned to Holmes as a Rosetta Stone to explore the original D&D rules and supplements, using them to cover higher levels of play, in addition to the OD&D variants published in The Dragon.

Over the next few weeks, I invite you to join me as I post about my experiences running a Holmes-based campaign, including my interpretations of the rules, as well as the methods I used for expanding play beyond the scope of the original rulebook.

Email ThisBlogThis!Share to TwitterShare to FacebookShare to Pinterest
Labels: Holmes