Although I started running Holmes-based games using the Basic Set rulebook, I soon incorporated rules and character classes from the OD&D supplements and The Strategic Review articles.  Below, I provide an overview of the range of options. 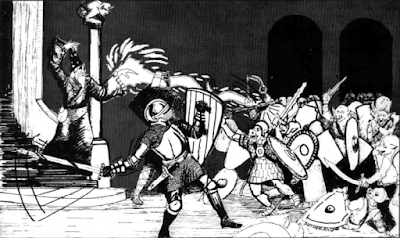 The three original D&D character classes, a fighting man, a magic-user, and (probably) a cleric, battling a horde of pig-faced orcs.  From the Basic Set rulebook (1977).  Illustration by David C. Sutherland III.

I used percentile Strength and Dexterity-modified Armor Class (-1 for every point over 14) from the Greyhawk supplement, as well as the Greyhawk paladin.

Holmes states a "magic-user acquires books containing the spells, the study of which allows him to memorize a spell for use." which implies that magic-users accumulate a set of magical books, not a single personal spell book as with AD&D and B/X.

I had magic-users start with a Book of First Level Spells.  Higher level Books of Spells were obtained through adventuring or other means, such as from enemy magic-users.  (In fact, the thaumaturgist from the sample dungeon in Holmes possesses two such books).

I used Peter Aronson's Illusionist sub-class from The Strategic Review #4, although would recommend The Complete OD&D Illusionist from Jon Peterson's blog.

My go-to for the Witch sub-class is from The Dragon #20, from which I extracted a version for Holmes in a post on the OD&D Discussion boards, here.

Holmes states "Characters who employ spells are assumed to acquire books containing the spells they can use, one book for each level." which presumably includes clerics.  There is no % chance to know clerical spells, as they are divinely bestowed through prayer.

(See also OD&D Clerics for the origins of the cleric class).

I used the Monk sub-class as presented in the Blackmoor supplement (which I nowadays suspect was indeed Brian Blume's invention).

I also used the Druid sub-class, originally conceived by Dennis Sustare, as presented in the Eldritch Wizardry supplement.

I used the rules from the Greyhawk supplement for demihuman thieves.

(Darrold Wagner, the creator of the thief class, was recently interviewed on the Save or Die! podcast, which is highly recommended and can be accessed, here).

I also used the Assassin sub-class as presented in the Blackmoor supplement, although nobody ever chose to play one.

The dwarven cleric is described as an NPC class in the Greyhawk supplement.

For elves, we split xp and rolled for hit dice on the fighting man xp progression table (where they are listed with men, dwarves, and halflings) and % chance to know spells on the magic-user xp progression table.  (See this thread on Dragonsfoot, for more discussion).

The elven cleric is described as an NPC class in the Greyhawk supplement.

For halflings - there's a totally different feel to the game, if you call them hobbits.

There are rules for half-elf clerics in the Greyhawk supplement.

Thus, an expedition might include, in addition to the seven basic classes, an African witch doctor/magic-user, a centaur, an Amerindian medicine man/cleric, a lawful werebear, a Japanese Samurai fighting man and a half-human, half-serpent Naga.

Readers are referred to this post over at Zenopus Archives for more discussion.

Finally, we also experimented with a few of the character classes for OD&D published in The Dragon, such as The OD&D Alchemist and A Plethora of Obscure Sub-Classes.
at January 09, 2021