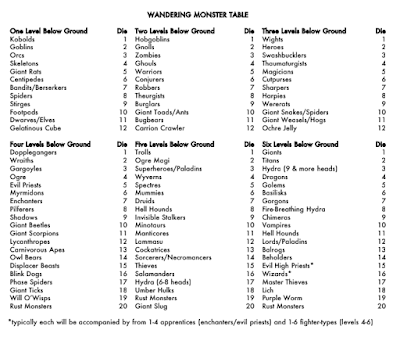 Wandering monster table from the Greyhawk supplement (1975), reformatted in the style of the Holmes rulebook.

Holmes does not include entries for giant beetles, giant scorpions, giant slugs, giant snakes, giant toads, or giant weasels, although these are covered in Greyhawk.  (Giant ants, giant centipedes, and giant rats were added in the 2nd printing.)  For stats on giant hogs, see this post.

James Ward provides an expanded version of the table for level 4 in his article "The Wandering Monster", published in The Dragon #15 (June, 1978).  This includes stats for carnivorous apes (differing from the stats published in the AD&D 1e Monster Manual).

Other monsters not appearing in Holmes, but covered in Greyhawk include beholders, golems, lammasu, liches, ogre magi, phase spiders, salamanders, titans, umber hulks, and will o' wisps.  (Balrogs were removed from OD&D vol. 2, but you can view the deleted entry, here.)

Wilderness wandering monster tables were originally presented in OD&D vol. 3, although were updated and greatly expanded in the Eldritch Wizardry supplement.  (I provided an in-depth review of the expanded tables in this post.)

Eldritch Wizardry incorporates monsters from the Blackmoor supplement, as well as The Strategic Review #s 1-5, 7, but also lists multiple creatures (mostly animals) that would not get proper stats until the publication of the AD&D 1e Monster Manual.

Of course, one approach would be to simply use the Monster Manual, which is actually more compatible with Holmes than with the AD&D 1e Players Handbook or Dungeon Masters Guide, as discussed in this post at Zenopus Archives.

However, the AD&D 1e Monster Manual makes changes to monsters as presented in OD&D and the Holmes rulebook, and so I wanted to come up with an expanded list of monsters purely for use in an expanded Holmes game (see tomorrow's post).