Here is my writeup of the witch class for Holmes, as described in "Another Look at Witches and Witchcraft in D&D" by Ronald Pehr, from The Dragon #20 (November, 1978).  (The article includes rules for advancement to 18th level and 1st to 8th level spells). 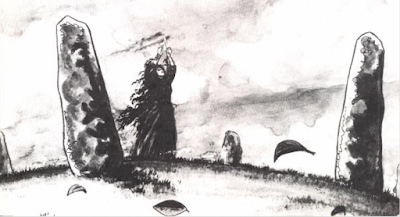 Witches may be considered to bear the same relationship to druids as a magic-user towards a cleric of his own alignment.  The witch uses her harmony with nature to increase her knowledge and power.  Witches are neutral, dedicated neither to good nor evil as humans know the terms; however, an individual witch may have either good or evil tendencies.
Witches need at least 13 in both Intelligence and Wisdom.  Working in harmony with nature and exerting influence over people requires a Charisma of at least 9.  Witches have the same restrictions on weaponry and armor as magic-users.
At 1st level witches can brew poisons, narcotics, and hallucinogens.  These cannot be used to coat weapons, the victim must imbibe them — perhaps mixed into his wine.  For each experience level, a witch can brew a 1 die draught/day.