The Mars novels by Edgar Rice Burroughs were a major influence on the early D&D game.  Martian races and creatures even appeared in the Wilderness Wandering Monsters tables in OD&D vol 3 The Underworld & Wilderness Adventures.

The "Warriors of Mars" rules for miniature wargames, published by TSR in July, 1974 (six months after the original D&D rules), are a standalone set of rules for adventures on Barsoom.  While not compatible with OD&D, they are useful as a sourcebook. 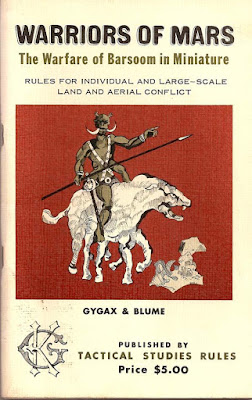 Warriors of Mars: The Warfare of Barsoom in Miniature (July, 1974) by Gary Gygax and Brian Blume.  Illustrated by Greg Bell.  Downloadable at archive.org

The forward by Gary Gygax states "this project was done at the request of the firm which originated the miniature figures for this singular aspect of wargaming".  The firm is identified as Hinchliffe Models (later Heritage Models) in Jon Peterson's Playing at the World (2012).

For a look at the Hinchliffe and Heritage miniatures, see articles by Laurence Dunn at erbzine, reprinted from the Edgar Rice Burroughs Amateur Press Association (ERB-APA) fanzine, issue #100, issue #101, issue #102, and also this website.

The book is divided into 3 parts (Land Warfare, Aerial Warfare, and Notes on Personality Figures, Barsoomian Races & Animals) followed by a series of combat tables.  There is also a map of Barsoom (depicted below) and 24 interior illustrations. 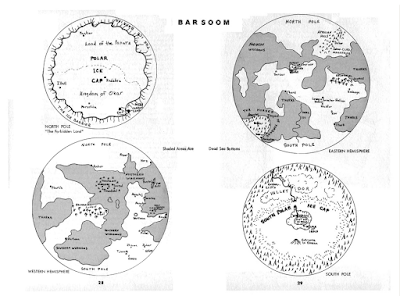 The rules for individual combat involve rolling 3d6, with its bell-shaped probability curve, so that advancement in fighting skill with increasing experience is not linear.  The maximum level attainable is 12th, (John Carter is 13th).

There is only one character "class" (that of a "fighting man").  An "experience" points table is included for defeating Martian animals or warriors, capturing enemy warriors or items such as fliers or treasure, and freeing prisoners.

There are also guidelines provided for individual adventures, from mapping the wilderness (with encounter tables based on the terrain), to exploring deserted cities (see also "Deserted Cities of Mars" by Jim Ward in SR #3), or plunging the labyrinthine pits beneath (using D&D). 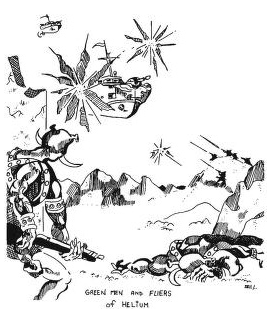 Illustration by Greg Bell, from Warriors of Mars.  Fliers modeled after cover illustration for the 1973 Ballantine edition of "Swords of Mars", by Gino D'Achille.

There are also short descriptions of the various Barsoomian races (red, white, black, yellow, green) and animals (white apes, darseen, malagor, orluks).  Other animals are not covered, since they are already described in sufficient detail in the novels.


In summary, "Warriors of Mars" is a standalone game, unrelated to D&D, but could serve as the backbone for creating a series of adventures on Burroughs' Barsoom.

Incidentally, Ernie Gygax's character "Erac's Cousin" was transported to Barsoom in Gary's original Greyhawk campaign.  Some of the details are posted in this thread at the Piazza.*

*Gygax recounts the tale in "Dual to the Death: The First Dual Classed Character" published in Dragon #319 (May 2004).

Email ThisBlogThis!Share to TwitterShare to FacebookShare to Pinterest
Labels: ERB