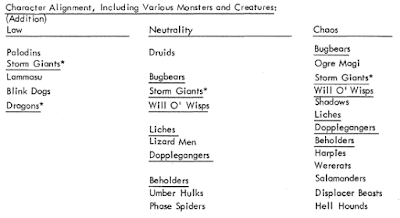 Alignment Table, from Supplement I: Greyhawk

Beholders: Originally conceived by Terry Kuntz, according to the preface in the AD&D 1e Monster Manual by Gary Gygax, and as discussed in this thread on OD&D Discussion.

Bugbears: Described as monsters "of the 'giant class,' being great, hairy goblin-giants".  The illustration by Greg Bell in the Greyhawk supplement depicting bugbears with pumpkin-heads was based on a misunderstanding, as Gygax reported in this thread on Dragonsfoot:


The pumpkin-headed bugbear was an artist taking literally my description of the monster as having a head like a pumpkin, i.e large, round flat oval.

Carrion Crawlers: Envisioned as competitors of "ochre jellies, black (or gray) puddings, and the like", one of Gary's contributions to "the clean-up crew". 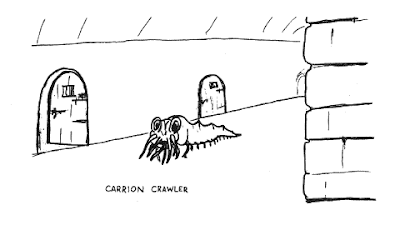 Illustration of a carrion crawler, from the Greyhawk supplement, attributed to Dave Arneson


Displacer Beasts: Inspired by the coeurl, a feline-like creature from the 1939 science fiction story "Black Destroyer" by A. E. van Vogt, later incorporated into the novel The Voyage of the Space Beagle (1950).

Dopplegangers: Based on the Doppelganger of folklore (possibly inspired by an episode of Kolchak: The Night Stalker, involving a doppelganger?)

Druids: "Priests of a neutral-type religion" who "are combination cleric/magic-users" although the druid character class in Supplement III: Eldritch Wizardry would supersede this version.

Elementals: Additional details are given for elementals, first described in OD&D vol. 2.

Gelatinous Cubes: Originally mentioned in OD&D vol. 2 Monsters & Treasure but only given statistics in the Greyhawk supplement.

Giant Slugs: Conan battles a giant slug in "The Hall of the Dead" by Robert E. Howard and L. Sprague de Camp, 1967

Golems (Flesh, Stone, Iron): The flesh golem is based on Frankenstein's monster.

Harpies: From the Harpy of Greek mythology.

Homunculus: Created through a special formula involving both an Alchemist and a Magic-User, becoming the servant and counterpart of the latter.

Lammasu: From the Lamassu of Sumerian mythology.

Liches: Modeled after the lich Afgorkon in the short story "The Sword of the Sorcerer" by Gardner Fox, in "Kothar: Barbarian Swordsman" (1969)

Lizard Men: Possibly inspired by the Horibs of Pellucidar (in "Tarzan at the Earth's Core" by Edgar Rice Burroughs, 1929)

Lycanthrope: Wererat/Rat Man (possibly inspired by the rats in "The Swords of Lankhmar" by Fritz Leiber, 1968), discussed here.

Ogre Magi: Oni, or "Japanese Ogres", inspired by General Raiko and the Ogres of O-E-Yama, a beautifully illustrated children's book translated into English from Japanese, according to Gygax. 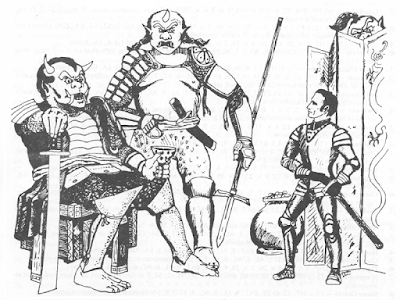 
Owl Bears: Inspired by one of the plastic toy "prehistoric animals" manufactured in Hong Kong.

Phase Spiders: Creatures able to phase into and back from etherealness.

Rust Monsters: Another creature inspired by one of the plastic toy "prehistoric animals" manufactured in Hong Kong.

Salamanders: Originally described as a type of free-willed, fire elemental.

Shadows: These incorporeal creatures feature in "The Sorcerer's Jewel", a short story by J. Eric Holmes, published in Dragon #46 (Feb 1981)

Stirges: Possibly inspired by the Strix of Greek mythology. 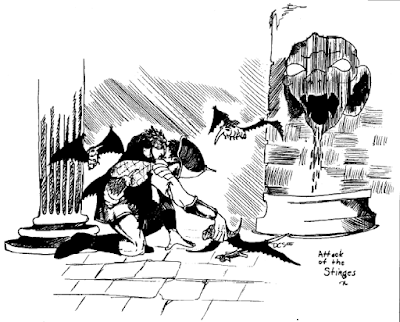 Attack of the Stirges, from The Strategic Review, vol I, no 5 (Dec 1975), illustration by David Sutherland

Titans: Based on the Titans of Greek mythology.

Tritons: "Similar to mermen" although tougher and able to use magic-user spells. 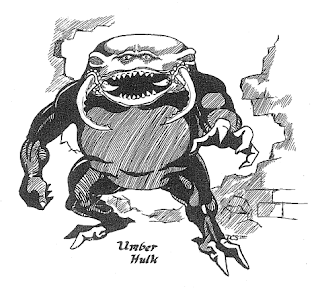 Illustration of an umber hulk, from the Blackmoor supplement (1975), by David Sutherland


Will O' Wisps: Based on the will o' the wisp of folklore.

Vampires: Additional details are given for vampires, including the mention of a variant.  "Vampires from the region of the Middle East are invisible, but they are not able to Charm."