There have been variois works based upon module B4 "The Lost City" by Tom Moldvay (see the B4 Campaign Sourcebook for comprehensive reviews). 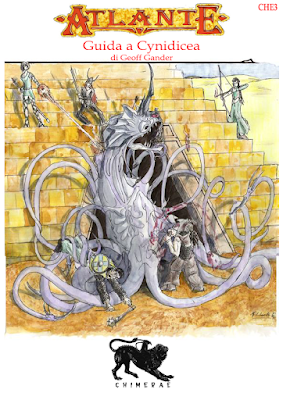 Cover to the Italian version of Geoff Gander's "Guide to Cynidicea" (2005).  Illustration by Christopher Gareth Few.

Geoff Gander’s DM’s Guide to Cynidicea was translated into Italian by the Chimerae Hobby Group as CHE3 “Guida a Cynidicea” (May, 2005).  Graced with several illustrations by Christopher Gareth Few, the 48 page document is downloadable for free.

Return to the Lost City: 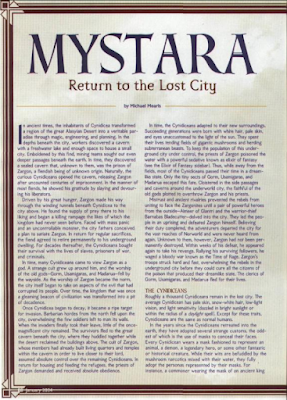 Mearls describes the Underground City after a pair of adventurers led the Cynidiceans in a revolt, culminating in the defeat of Zargon.  Unfortunately, Zargon reappeared and regained control of the city, following their departure.

There are some additional details on the Underground City, as well as a description of the hallucinogenic drug ("the Elixir of Fantasy") used by the Cynidiceans. 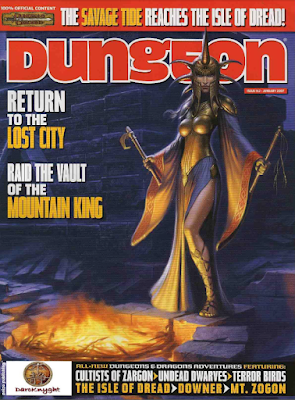 "Masque of Dreams" by B. Matthew Conklin III was published in Dungeon #142 (January, 2007).  Cover illustration by James Ryman.

Dungeon #142 contains a 3.5e adventure, designed for character levels 1-5, based on Mearl's article from Dragon #315.

The adventure begins in Ashinana’s Oasis, between the towns of Parsa and Sulba, in the western Alasiyan Desert.  The Lost City is a three to four day journey northeast of the oasis (in the approximate location depicted on the map in the revised D&D Expert rulebook).

Illustrations by Michael M. Kaluta with maps by Robert Lazzaretti (an additional online supplement was also available for download). 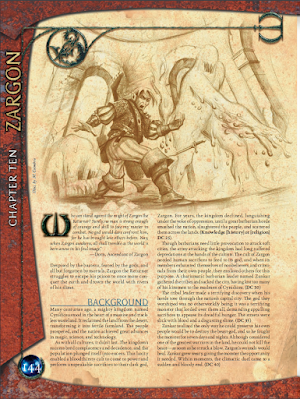 "Elder Evils" is a 3.5e supplement, describing high-level, eldritch threats to the PCs campaign world.  Chapter 10 is devoted to Zargon "the Returner".

Full 3.5e stat blocks are provided for Zargon (described as 30' tall, double the height in module B4, with an extra six tentacles for arms, resulting in 18 tentacles). 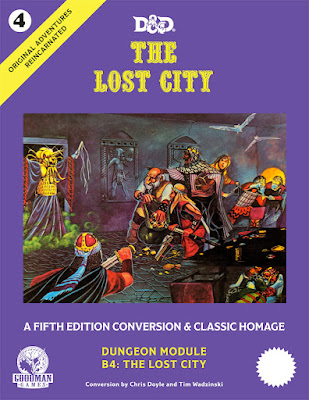 A reprinting of the original version of module B4, with introductory retrospectives, as well as a detailed conversion to 5e, by Chris Doyle and Tim Wadzinski.

There's a host of new material, with entire chapters devoted to the Lower Pyramid, the Underground City, the Goblin Caves, and the Lower Catacombs.

The authors drew inspiration from Mearl's article in Dragon #315, such as "the Elixir of Fantasy".  (You can read my review of OAR #4, here).

at June 18, 2022
Email ThisBlogThis!Share to TwitterShare to FacebookShare to Pinterest
Labels: BECMI, Mystara