Origins 80: Dwellers of the Forbidden City

Origins 80, sponsored by Strategy and Fantasy World, was held at Widener College in Chester, Pennsylvania, June 27-29, 1980.  The AD&D tournament was "Dwellers of the Forbidden City" by David "Zeb" Cook. There were no ads in The Dragon (apart from one advertising group transportation to Origins in The Dragon #38 (June, 1980) and Jake Jaquet's editorial in The Dragon #40 mentioned the location "was changed to Widener at the last minute, due to a scheduling problem with the University of Delaware, where the convention was originally supposed to be held".*
*the location was given as 293 Walchaerts Ct., Newtown Square, PA in The Dungeoneer #15 (Jan-Feb, 1980) and then Valley Forge Shopping Center, King of Prussia, PA in The Dungeoneer #16 (March-April, 1980), #17 (May-June, 1980)

A prior ad in The Dragon #36 (April, 1980) stated "This convention season, TSR Periodicals will be sponsoring tournaments at four major conventions across the country." Michicon IX (June 6-8), Origins (June 27-29), Gen Con XIII (August 21-24), Pacificon (August 29 - September 1).  The "Aerie of the Slave Lords" was held at Gen Con, but I'm not sure about the other two.

The  tournament  scenario is given in the background of the published module, and involved "The Forgotten Entrance" (areas A1 to A10).  The characters used were the first six listed in the "Character Roster", and players were given 3.5 hours to complete their objective.

"Dwellers of the Forbidden City" was described as "a lost jungle city in the great tradition of  Edgar Rice Burroughs" by Eric Boyd in Dungeon #116, although perhaps owes more to the "Weird Tales" era than to either Burroughs or Haggard.

When asked about the influence of "Red Nails" by Robert E. Howard, Cook responded:

Well, I'm not surprised by the "Red Nails" reference since that was what I was clearly going for. It's my favorite Conan story and the city was based off of it. It was originally something I did for my own campaign and then used it as my resume when I applied to TSR.

David Cook, from an interview with James Maliszewski
(July 3, 2009) 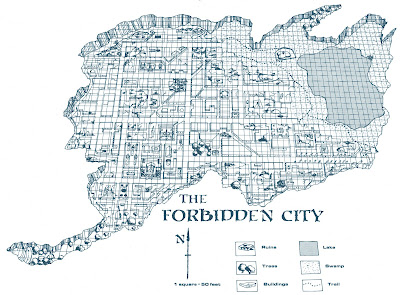 The published adventure was presented as more of a wilderness micro-setting with several, loosely related encounter areas, rather than as a traditional dungeon, allowing for a much more open-ended, sandbox-style game.

Perhaps because the tournament portion only comprised a small part of the finished module "Dwellers of the Forbidden City" was not published as part of the C or "Competition" series, but was originally going to be released as part of the S or "Special" series, according to The Acaeum.

The module is notable for the introduction of several new monsters, including the aboleth, bullywug,* mongrelman, pan lung,* tasloi, yellow musk creeper,* and yuan ti (similar to the "sons of Set" from JG 88 "Dark Tower" by Jennell Jaquays, likewise inspired by "Red Nails")

As with prior early tournament modules, "Dwellers of the Forbidden City" was shoehorned into "The World of Greyhawk" setting, although fits quite nicely into "The Wild Lands" of the D&D game world, from X6 Quagmire! on Mystara. 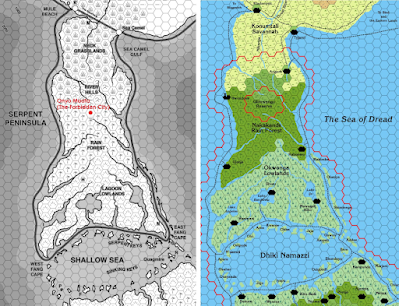 Map of Serpent Peninsula from X6 Quagmire! (left) and Champions of Mystara (right) indicating the location of Onyo Maata, a suitable location for I1 Dwellers of the Forbidden City

I've previously posted my ideas for a X6/I1 Quagmire/Dwellers of the Forbidden City mash-up over at the Piazza, including BECMI stats for bullywugs, mongrelmen, tasloi, and yuan ti.

Having run this adventure a few years ago, I think it has great potential to be expanded (perhaps as part of the Goodman Games "Original Adventures Reincarnated" series).