The Dragon #31 (November, 1979) included a pair of articles by Tim Kask and Jake Jaquet on role-playing adventures in the jungle. 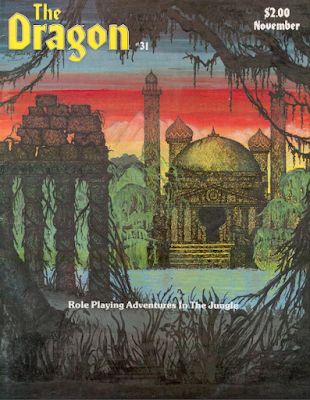 Civilizations: From High to Low, by Tim Kask

All around you, the jungle closes in: hot, stifling, humid, the air heavily laden with delicate scents and pungent aromas alike—foreign, oppressive, foreboding, Overhead, a constrictor the thickness of your thigh dozes in the meagre sun that penetrates the leafy canopy. All around you swoop birds exotically colored and fantastically feathered, piping their raucous calls. The air, so thick it threatens suffocation, is alive with insects: stinging, buzzing, biting, blinding and maddening. Deadly animals can only be seen occasionally, often too late to react to. More common are the more placid types, so at home here in this alien environment, posing no overt threats. Underfoot, more insects, some deadlier than any snake. Snakes slither everywhere, festooned from branches, clustered in the sun, silent, sinister, deadly. Overhead, the ever-present, never silent monkeys, those gossips of the jungle who see all and tell all to all who can and will listen.

Kask touches on various aspects of real-world cultures in Africa, South America (plus Central America & The Valley of Mexico), and Asia and Micronesia.
The role-playing effects of heat and humidity are considered, as well as a section on Fantastic Civilizations:

H. Rider Haggard and Edgar Rice Burroughs achieved literary fame by writing novels dealing with the jungle. Haggard, in particular, specialized in fantastic civilizations isolated from time and man’s interference, located in deep jungles, usually in a hidden valley, or on top of a jungle-girt mountain. I can only recommend that you peruse their works for inspiration in establishing your jungle adventures.

Burroughs introduced several evocative lost cities and civilizations in the Tarzan series (such as Opar, Xuja, and Pal-ul-Don)
Kask mentions "Lost Civilizations: A Fantasy Supplement for Source of the Nile" by J. Eric Holmes in The Dragon #24, and also discusses jungle weapons, such as blowguns and the effects of poisons.

A Vacation Spot? Certainly Not! by Jake Jaquet 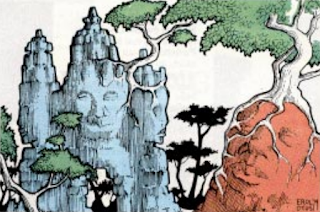 Jaquet discusses the impact of geography, and provides suggestions for incorporating rules from Source of the Nile in D&D.  He describes various jungle Flora and Fauna.

Statistics for jungle creatures from the AD&D 1e Monster Manual are reproduced:

In addition, the entry for Dragon's Bestiary describes the Ukuyatangi, or "Jungle Hydra"

Jaquet covers natural hazards, including disease, quicksand, and animal traps set by native tribes.  He concludes with suggestions for a high-level magic-user establishing a base in the jungle.

Kask and Jaquet's articles provide starting points, but are short on details useful for gaming.  The D&D modules X1 "The Isle of Dread" and X6 "Quagmire!" are extremely useful in this regard. 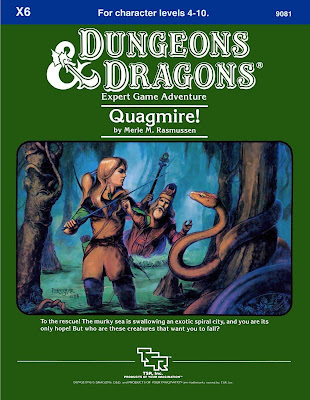 I've run X1 "The Isle of Dread" once, and X6 "Quagmire!" twice (once recently).  The latter in particular is more useful as a mini-setting, rather than an adventure module per se.

at October 16, 2021
Email ThisBlogThis!Share to TwitterShare to FacebookShare to Pinterest
Labels: BECMI, Mystara