"Of the Gods" by Craig Bakey was published in The Dragon #29 (September, 1979), in which a system for designing a set of "Campaign Gods" is presented, distinct from the various mythos in Gods, Demi-Gods, & Heroes. 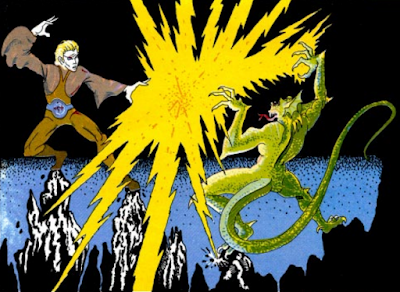 Illustration by David C. Sutherland III, possibly "Thunderfoot" the god of storms in battle with "Darquetue" the god of monsters

Bakey posits that the dominance of pantheons is cyclic, and that "beyond the gods are forces of immeasurable power who have long since ceased to care about the multiverse they fathered (sometimes called the old gods)".*
*these "old gods" are similar to the Old Ones as described in the D&D Immortals Set, by Frank Mentzer
According to Bakey's cosmology:

No one can be sure of the exact nature of the old gods but most interpretations describe them as 24 hyper-physical padrones which manifest themselves as coloured jewels of six different disciplines. It is assumed that the concepts of Law and Chaos originated in these jewels, as did the gods themselves.

The first discipline governs abstract relation—existence, relation, quantity, order, number, time, change and causation. These are the blue gems. The second, the purple gems, govern space, dimensions, form, motion and space in general. The greens govern matter, both organic, inorganic. Intellect is governed by the yellows, including the formation and communication of ideas. The fifth, the oranges govern volition, namely individual and intersocial volitions. The final discipline manifests itself as red gems that govern affections: personal, sympathetic, moral, religious and affections in general.

All gods have the following properties in common:

1. All abilities (strength, intelligence, etc.) equal 20
2. Magical resistance is at least 25%
3. Not affected by weapons of less than +2
4. All gods capable of gate (95%), polymorph self, tongues,* ESP, and astral ethereal travel

Tables are provided to determine the following characteristics:

*one of the entries in the table is "Duptrmr Nrinh/Tulrt" an error introduced by the optical character recognition used to digitize the text.  I googled the term, to see whether anyone had figured it out, and google asked "Did you mean: Supreme Ring/Ruler".  I therefore realized that the entry must have read "Supreme Being/Ruler" and also surprisingly that one can use google to help decipher OCR errors...
**nine-point alignment system from the AD&D 1e Players Handbook is used

Naturally, I had to give the tables a spin.  Here is what I came up with:

Status in the hierarchy (55 on d%): God of the Inner Circle (no relations)
Alignment (72 on d%) and gender (91 on d%): Lawful neutral, female
Armor class and hit points (11 on d%); AC 3, hp 120
Gods of the Inner Circle may have two portfolios.
Roll d4 and  apply the following results:
1 - roll on P1 only, 2 - roll on P2 only, 3 or 4 - roll on each table.
I rolled a 1 on d4 (roll on Portfolio table 1 only): 44 on d%: Space
Those gods whose portfolios are determined on tables P1, P2, or P3, will have the powers of Wish (Limited or Full) over events concerning their respective portfolios as well as rulership over non-humanoid types governed therein.
Extraordinary abilities and fantastic possessions (3 rolls):
83 on d%: Fighter abilities (6 on 2d4): Lord 21st level
06 on d%: Minor artifact (roll on any miscellaneous magic table or rings): drums of panic
19 on d%: Armor/Shield
Chance of intervention (13 on 2d10): Sympathetic to cosmic affairs only

We therefore have a goddess of space, F21, LN, AC3, hp 120, with armor/shield and drums of panic, sympathetic to cosmic affairs only.  Certainly enough to get the creative juices flowing.  It would be interesting to randomly determine a whole pantheon, this way.

The author shares details of several deities he created for his home campaign in Toronto, heavily influenced by the works of Michael Moorcock:

The conflict began when the unholy armies of the Lord of Night secured the Astral Plane, banishing those inhabiting it and restricting travel. But as the Cosmic Balance began to tip, the Neutral Lords enlisted the aid of a group of strict lawful immortals and the struggle for supremacy was on.

Bakey's pantheon is divided into three houses, based on the OD&D three-alignment system.  They are described in more detail in his article, but also listed, here below:

1. The Commune of Codification (The White Lords of Law)

Bakey's article captures the spirit of OD&D campaigns as they were run in the days before the codification of AD&D and prepackaged campaign settings.  It would be extremely interesting to know whether any of his material still exists.

Bakey's article in The Dragon #29 was missing a title, a fact addressed by assistant editor Jake Jaquet a couple of issues later:

...we (the TSR Periodicals staff and our printer—we’ll share the blame this month) inadvertently dropped a title and a couple of bylines for articles that appeared in THE DRAGON #29. Our apologies. Now, here’s your chance to play editor: Take out your #2 robin’s-egg blue editing pencil and open your copy of TD #29 to pages 4 and 5—Craig Bakey’s article-pick a clear spot in the art and in big block letters write “Of The Gods.” That’s the title that should have been there. Circle it and spec it for 48 point Souvenir Bold type.

at October 09, 2021
Email ThisBlogThis!Share to TwitterShare to FacebookShare to Pinterest
Labels: BECMI, OD&D