Review: The Lost Dungeons of Tonisborg

I was an enthusiastic backer for "The Secrets of Blackmoor" film project, for which "The Lost Dungeons of Tonisborg" was a high-level, Kickstarter reward.  The long-awaited tome arrived, this past summer, although I only had a chance to read it, over the holidays. 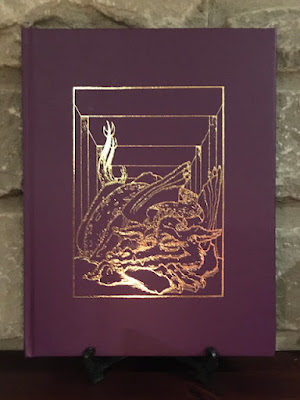 My copy of "The Lost Dungeons of Tonisborg" (2021) by Greg Svenson, Griffith Morgan, and D.H. Boggs, proudly displayed on the mantelpiece in our living room.

The book is a deluxe, hardcover publication with a gold foil-embossed, fabric cover.  It's divided into 4 main sections: an introduction (along with high-quality reproductions of the original dungeon maps), advice on employing traditional game methods and tools, the updated maps and keys, and a section on "Zero Edition Dungeoneering" rules to play with.

The introductory section includes a short essay by Greg Svenson, creator of the original dungeons beneath Tonisborg, detailing his introduction to Dave Arneson's "Blackmoor" campaign, and how the 1973 playtest rules for "Dungeons & Dragons" were used.

As mentioned above, there are high-quality reproductions of the maps and keys for all 10 levels of the original "Dungeons of Tonisborg", together with commentary.  These are actually quite amazing to behold, when one realizes they predate the publication of D&D.

The next major section begins with the time-honored tradition of an example of play.  This is followed by about 30 pages of advice for employing traditional game methods and tools.

Although I'm a fairly experienced DM, I nevertheless enjoyed reading this section, and picked up several great ideas that will definitely up my game, the next time I run a dungeon crawl.

The only thing I will say, is that the advice given is great for running a traditional megadungeon - which Tonisborg isn't, exactly (more on that, below).

The Dungeons of Tonisborg:

The updated maps and keys for the "Dungeons of Tonisborg" comprise about 40 or so pages.

The architecture of the dungeon is marked by an astonishing degree of vertical connectivity - more by several orders of magnitude than anything I've ever seen before.  This alone would make for a really great dungeon expedition for experienced gamers.

The main antechamber near the entrance is guarded by a large contingent of the Order Draconae, a knightly order created by the Great Svenny to control access to the underworld, (similar to the elves who controlled access to the dungeons beneath Blackmoor Castle).

What soon becomes apparent is that the dungeon as originally stocked is teeming with monsters - almost every room is occupied by a creature (or several creatures, more often that not), and frequently in spaces that challenge any notions of dungeon ecology.

The "safe" antechamber to the dungeon and high density of monsters per room evoked for me the "Dungeon!" boardgame, by David Megarry.  It also makes sense, if Svenson created Tonisborg to playtest the original D&D rules.

For myself, the keys should be viewed as historical.*  Any DM worth his salt can take this underworld setting and repopulate it, perhaps with occasional reference to the original (and preferably with monsters the players are unfamiliar with).

The final section of the book contains an abridged and revised version of "Champions of ZED (Zero Edition Dungeoneering)" by Daniel Boggs, a simulacrum of the original D&D rules.  I wasn't overly familiar with "Champions of ZED" beforehand, but found it very intriguing.

Unlike "Swords & Wizardry", "Champions of ZED" is not a straight retroclone of OD&D.  Rather, Boggs draws upon the interaction between Dave Arneson and Gary Gygax (and their play groups), as well as Arneson's and Gygax's perspectives on OD&D over time.

I've run OD&D a fair bit in recent years, and can therefore appreciate the value of "Champions of ZED".  It's a richer game.  Even little things, like the expanded equipment lists, will come in handy (although the combat rules tend to get a bit crunchy).

That said, while the rules are a fitting accompaniment to the Lost Dungeons of Tonisborg, they aren't necessary to run the dungeon.  Any rules will do.  (The nature of the environment lends itself to D&D, although DCC would also work quite well).

"The Lost Dungeons of Tonisborg" is a must-have for the D&D or FRPG enthusiast with any scholarly inclinations.  The window into the past is fascinating and informative.  Those with an appreciation for the Blackmoor setting will also find the book valuable.

For the more general TTRPG audience, this is one heck of a dungeon.  It's vertical interconnectedness provides a stimulating environment, although I would highly recommend restocking the keys provided in order to tailor the experience to individual groups.

The advice for DMs and section on "Zero Edition Dungeoneering" are wonderful primers for those wishing to come up to speed on the "old school" game experience.  The dungeon is particularly well-suited to a Holmes/OD&D, BX/BECMI, or AD&D campaign.

For those who wish to acquire a 2nd printing of the 1st edition, they are available for pre-order here.