WG4: The Forgotten Temple of Tharizdun

WG4 "The Forgotten Temple of Tharizdun" serves as a companion to module S4 "The Lost Caverns of Tsojcanth", expanding the wilderness map into another part of the Southern Yatils, southwest of the Gnome Vale. 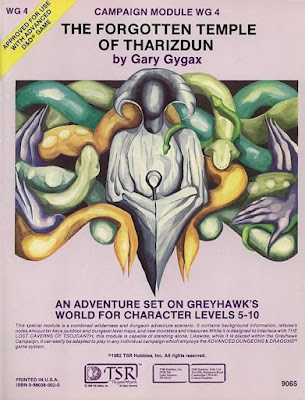 Cover to module WG4 "The Forgotten Temple of Tharizdun" (1982) by Gary Gygax.  Illustration by Karen Nelson.*

*Nelson also contributed the back cover and interior illustrations.  Her family's relationship with Gygax was discussed by Frank Mentzer on Dragonsfoot:

A local family named Shook were friends of the Gygaxes. The kid, Eric, was badgered into working at TSR for a while, and was tacked onto my RPGA office in '81 or so for a brief time. His mother wheedled Gary into commissioning her for artworks, and hence the oddball watercolor cover for this piece. (Might have done the odd map, too.)

The Temple was built in a previous age, a secret place of worship to Tharizdun, He of Eternal Darkness.  It drew the most wicked persons to it, and the cult flourished for generations, sending out its minions from time to time to enact some horrible deed upon the lands around.  However, a great battle eventually took place between Tharizdun and those opposed to his evil.  Unable to destroy him, they were strong enough to overcome his power and imprison him somewhere, by means none have ever been able to discover.  Thus Tharizdun disappeared from the face of the earth, and from all of the other known planes, and has not been seen again since.

from "The Forgotten Temple of Tharizdun" (1982)

The PCs are asked by the gnomes to track a band of marauding humanoids to their lair, which turns out to be an ancient, two-stepped, black ziggurat.
The temple consists of an upper and lower level, a dungeon level, and a hidden undertemple (which is difficult to locate, and may go undiscovered).

Gygax thanks Rob Kuntz "for inspiration regarding the subject material of this scenario."  Kuntz had earlier created the dark god "Tharzduun", who served as inspiration for Gygax's Tharizdun.*

Kuntz states that Tharzduun was "conceived from CAS’s Thaisidon"* in this essay (originally published in AFS ("Anti-Fascist Society") zine #2. 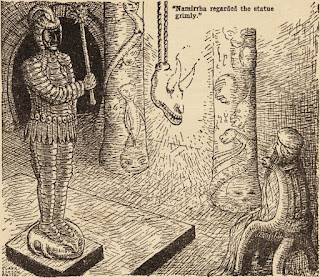 Gygax envisioned a connection between Tsojcanth and Tharizdun, and incorporated Tharizdun into his "Gord the Rogue" novels.*

WG4 "The Forgotten Temple of Tharizdun" uses monsters from the Fiend Folio (1981):

If you are actually utilizing this module as an adjunct to "The Lost Caverns of Tsojcanth", you might consider what was done in the actual campaign from which both were written.  The adventurers discovered Gnome Vale in the course of seeking the 'Caverns.  Later, they returned for rest and recuperation after suffering severe damage exploring the latter place.  Only three or four of the original party actually journeyed to the 'Temple, because, as is usual with any group, some of its number were not on hand when it was time to adventure.  Because only a portion of the group went, the gnomes went along.  After initial contact and a couple of pitched battles, several of the other party members joined the three, and the 'Temple was sacked.  Losses were minimal, because the players were reasonably adept, and hit-and-run tactics were used.

Gary Gygax, from "The Forgotten Temple of Tharizdun" (1982)

Gygax ran his group through an early version of "The Village of Hommlet" back in late 1975/early 1976, and again 2-3 years later, likely as a playtest for the module.
They later adventured in a revised/expanded version of the Lost Caverns of Tsojcanth, followed by the Forgotten Temple of Tharizdun.
Gygax acknowledges the original set of players (Luke Gygax, Mike Olson, Sonny Savage, Richard Kuntz, and Mitch Preston) in WG4.*

See also "From Hommlet to Tharizdun, by way of Tsojcanth" posted on the Greyhawk Grognard blog (March 22, 2013).

For a Master Class in running WG4, review the "Cold Text Files" (parts 1-9) accessible through the Wayback Machine, here (strange how online material regarding Tharizdun is often deleted...)

See also "Thoughts on The Forgotten Temple of Tharizdun" posted on the Greyhawk Grognard blog (April 12, 2018).

at November 20, 2021
Email ThisBlogThis!Share to TwitterShare to FacebookShare to Pinterest
Labels: Greyhawk