Q1: Queen of the Demonweb Pits

Module Q1 "Queen of the Demonweb Pits" by David C. Sutherland was released in October, 1980.  The long-awaited conclusion to the G-series and D-series trilogies, it was also intended to be "The first of a new series of other-planar adventures".*
*see "Playing on the Other Planes of Existence" in The Dragon #32 (December, 1979) for plans regarding additional adventures on the Astral, Ethereal, and Elemental planes 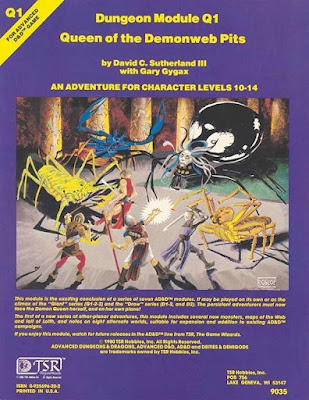 Lolth, the Demon Queen of Spiders, is worshipped by the Drow, although was not the actual mastermind behind the attacks of the giants.  The adventure is therefore useful as a standalone, but lateral to the metaplot of the preceding modules.
Design Origins:
The development of module Q1 has a long and storied history.  About a year before its release, it was revealed that Gary Gygax would not be writing it:

Question: When will Q1, QUEEN OF THE DEMONWEB PITS, be released?  I am really looking forward to playing in it.
Answer: Q1 is being written by Dave Sutherland, TSR’s Art Director.  Dave has a lot of demands on his time and is working on it as often as he can.  We are very short-handed in the Art Dept. and I cannot say when Q1 will be ready for release.

From The Dragon #31 (November, 1979)
The following month, Gygax provided more details in his column "From the Sorcerer's Scroll":

...I also worked up a number of dungeon modules, including the series which will culminate in an adventure on one of the planes of the Abyss (Q1, QUEEN OF THE DEMONWEB PITS).

It so happened that Dave Sutherland had a splendid inspiration regarding this setting, so my rather sketchy notes were set aside for use in another module, and Dave was given the go-ahead to do the scenario.  (As of this writing, it is nearly complete, and I hope that it will soon find its way into print!)  The information in the module should be sufficient to serve as a guide for development of the entire 666 “layers” of the Abyss.

From The Dragon #32 (December, 1979)
When the adventure was finally published, Gygax explained the following in its Preface:

As this is the last of a series of seven modules, six of which were authored by me, you might well wonder why this one was done by Dave Sutherland.  The explanation is simple.  About two years ago I laid out the outline of the action for this whole series, and over the next six months wrote as many modules.  The last was the crowning piece, of course, and it was left aside until a considerable period of time could be spent addressing it so as to assure that DEMONWEB was, in fact, something special.  In the meantime, I had to get busy finishing the DUNGEON MASTERS GUIDE, already behind schedule because I'd spent time on module design.  As I was reviewing my ideas for DEMONWEB, it suddenly struck me that what I had sketched out was far too similar to another module "rough" I was committed to: the TEMPLE OF ELEMENTAL EVIL, the final part of the VILLAGE OF HOMMLET (AD&D module T1).  Now I was faced with a true dilemma.
Finishing a module from an outline is not a difficult task.  Creating a whole new setting is, and that was exactly what was required for one or the other of the modules I was committed to.  Then one day, as I was talking with Dave, the quandary was resolved.  He showed me an idea he had for a "dungeon" level, and what a level!  What an idea!  This, I told him, was the perfect setting for the DEMONWEB, and straightaway placed the entire project into his capable hands.  Since then, he has been hard at work developing and perfecting the scenario you now have before you.  My only contributions have been some brief notes, a monster, a bit of editing, and this introductory piece.  I am certain that you will find DEMONWEB to be a superior design, and Dave deserves all the credit.  It is a fitting climax of and culmination for the other adventures in the series.  DEMONWEB is remarkably innovative and imaginative.  Take a look now, and see if you don't agree that it is special indeed - guaranteed to give your players unsurpassed challenge.  This module is truly for the expert player, and ability - not character level - will be the telling factor.  Enjoy!

Gary Gygax, from "Queen of the Demonweb Pits" (March, 1980)
Years later, Gygax revealed that he had little actual say in the decision:

As for Q1, Ask Dave Sutherland and Brian Blume about that.  It was taken out of my hands by the latter when Sutherland discovered the "Demonweb" pattern in a hand towel and talked Brian into using it as the main theme for the concluding module.  I had no creative control over it.
I had hoped to get to the Elder Elemental god in a sequal to the ToEE, but...

Gary Gygax, from EN World (February 24, 2003)
When asked about his original intent for "Queen of the Demonweb Pits", he stated:

My concept was that Eclavdra was aiming at dominance of the Drow through using the EEG to replace Lolth.  she, as the chief priestess of the elemental deity would then be the mistress of all.  The final scenario was to have been one in which the adventurers got involved in the battle between the evil entities and made it so that both lost and were tossed back to their own planes, relatively powerless in the Mundane world for some time to come.

Gary Gygax, from EN World (February 24, 2003)
These comments were reiterated on EN World in August, 2006, (here, here, and here) and have inspired some to develop their own conclusion to the GDQ series, using a plot more in keeping with what Gygax had originally envisioned.
Credits:
Sutherland was aided in the development of the adventure by David Cook and Tim Jones (whose contributions, particularly Cook's, may have been substantial).  Frank Mentzer did the editing and layout.  (According to Mentzer, the Demonweb was inspired by the design on a placemat, citing Sutherland himself).
Q1 also credits a list of individuals for their "able assistance", including Allen Hammack, Kevin Hendrix, Harold Johnson, Brian Pitzer, Paul Reiche III, Evan Robinson, Lawrence Schick, and Tom Wham.
Playtesters included Mark S. Anderson, David Cook, Helen Cook, Peter Drzewiecki, Lorece Ferm, Bill Hoyer, Kevin Huigens, Harold Johnson, Jon Jones, Dave LaForce, Alan Lepkowski, Mack Mackenzie, Frank Mentzer, Erol Otus, Brian Price, Don St. Ouge, Lawrence Schick, James Tessmer, Susan Tessmer, and Bob Waldbauer.
Spell Alterations:
Since the Demonweb is one of the 666 layers of the Abyss, spell casting works differently than on the Prime Material Plane.  While it's possible to learn how to cast spells correctly, the PCs will be unaware of this, and so a list of spell alterations is given.
Rules are provided for clerical, druidical, magic-user, and illusionist spells.  (A list of alterations for the spell effects of magical items is also given.)
The Demonweb:
The Demonweb has a convoluted, M.C. Escher-like quality, comprised of three interwoven levels, above which floats a separate, fourth level: 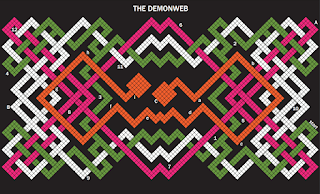 High-resolution map of the Demonweb, available for download, here

Each of the first three levels contain four doorways leading to other levels of the Abyss.  The fourth level contains eight gateways leading to alternate worlds, and a final doorway leading to Lolth's palace, on yet another layer of the Abyss.*
*the adventure therefore involves 14 different layers of the Abyss, and includes suggestions for adding three to four doorways to each of the first three layers, increasing to 24 different layers of the Abyss
As an adventure location, the Demonweb is wonderfully imaginative.  It can be restocked with new creatures, and plunked wholesale into any high-level campaign.*  (I feel that it has a B/X rather than AD&D aesthetic, possibly owing to Cook's involvement).
*alternatively, the three levels can be used as the template for a basic-level or expert-level dungeon, restocked with the appropriate creatures
Alternate Worlds:
The gateways leading to other or alternate worlds on the Prime Material Plane leverage the concept of a D&D multiverse:

The Kingdom of Caer Sidi

"An artificial twilight seems to hang over the land and the sun is apparently always behind a bank of clouds."*

The gateway leads into a cave within a frozen mountain range.

(I suggest using the animated film "Fire and Ice" (1983) for inspiration, here.

"The doorway is set on a white, sandy beach...  The sky is saffron yellow and the sun is a pale bright blue; a pink ocean...washes gently over the sand."

A vast, desolate swamp, "ringed by a wall of mountains."

The Labyrinth of Arachne

A subterranean maze, used as breeding ground for spiders.

"the last kingdom of the mountain dwarves in this world"

The PCs arrive as a major battle is about to commence (it is suggested to determine the outcome using miniatures).

The Nightworld of Vlad Tolenkov

A land of perpetual night, ruled by a vampire lord, in a world with no sun.

A miniature, disc-shaped world, situated at the edge of the galaxy.

For those wishing to expand the module even further, six additional worlds are suggested:

While sketched out in varying degrees of detail, entire adventures can be placed in any of these additional worlds.  (Alternatively, the DM may use one or more as the basis for adventures in their home campaign).
The Spider Ship of Lolth:
Lolth's castle is actually a giant, steam-powered, spider-ship.  While in keeping with the otherworldly theme of the adventure, some regard it as discordant.  (For an alternative, see the free adventure "Skein Of The Death Mother" on Dragonsfoot).
New Monsters:
Drider, Pedipalp (Large/Schizomida, Huge/Amblypigi, Giant/Uropygi), Scorpion (Large, Huge), Solifugid (Large, Huge, Giant), Yochlol (Handmaiden of Lolth)
Statistics are also provided for Lolth herself, the Demon Queen of Spiders.

The module was included in the supermodule GDQ1-7 "Queen of the Spiders" (1987).

The adventure was novelized by Paul Kidd in 2001

Update (February 9, 2022): see also Q2: Web of Souls, by Joseph Block, which aligns more with Gygax's original intent for the conclusion to the GDQ campaign arc, and may be substituted as a complete replacement for Q1

at November 27, 2021
Email ThisBlogThis!Share to TwitterShare to FacebookShare to Pinterest
Labels: Greyhawk