S4: The Lost Caverns of Tsojcanth

S1 "Tomb of Horrors" and S3 "Expedition to the Barrier Peaks" were tournament scenarios (from Origins I and Origins II, respectively), precursors to the C (or "Competition") series, while S2 "White Plume Mountain" was a puzzle dungeon, submitted by Lawrence Schick. 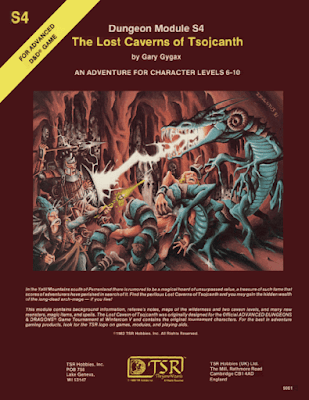 Cover to module S4 "The Lost Caverns of Tsojcanth" (1982) by Gary Gygax.  Illustration by Erol Otus.

S4 "The Lost Caverns of Tsojcanth" is similar to S1 and S3, having likewise originated as a tournament scenario (for Wintercon V in 1976), but was extensively reworked by Gary Gygax (who restocked the caverns and added a wilderness section).

The result is a heavily revised adventure, explicitly set within the recently published "World of Greyhawk" setting:

If the "World of Greyhawk" fantasy world setting is part of your campaign, the party is sponsored by the Margrave of the March of Bissel.  Perrenland, Ket, Veluna, and Iuz are enemies or rivals of Bissel.

Gary Gygax, from S4 "The Lost Caverns of Tsojcanth"

S4 (and its companion WG4 "The Forgotten Temple of Tharizdun") therefore serves as a fitting adjunct to T1-4 "The Temple of Elemental Evil" as part of a broader campaign set within the World of Greyhawk (perhaps concluding with the GDQ series).

Gygax states "Each hex is approximately 3.5 miles across. It shows the border areas of Ket and Perrenland, between the Velverdyva River and the town of Krestible, as shown on the map of the WORLD OF GREYHAWK Fantasy World Setting." 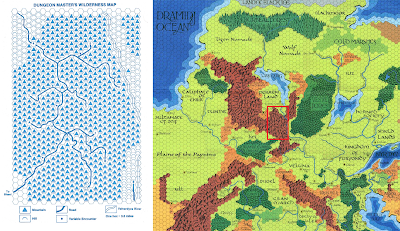 Approximate location of the wilderness map from S4 "The Lost Caverns of Tsojcanth" (1 hex = 3.5 miles, left) on the World of Greyhawk map (1 hex = 30 miles, right) based on terrain.

Unfortunately (and as discussed elsewhere) there is poor correspondence between the wilderness map* and World of Greyhawk map.  (See "The Southern Yatils" by Denis Tetreault for ways to address this).
*a standard scale of 8 miles/hex works much better

The lesser and greater caverns represent a challenge for experienced players.  The high density of deadly creatures is problematic for some, but I like to consider this a reflection of the caverns as a nexus between worlds, so that its inhabitants constantly change.

In addition to the 32-page scenario booklet, module S4 "The Lost Caverns of Tsojcanth" came with a 32-page supplementary booklet detailing new monsters and magical items:

*the Dao and Marid were featured in Dragon #66 (Oct 1982), and the Valley Elf and Cooshee in Dragon #67 (Nov 1982), shortly after module S4 was released, perhaps as a form of cross-promotion 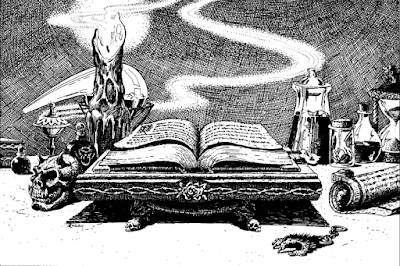 The Demonomicon of Iggwilv, illustration by Jeff Easley (with hidden messages in the script)

*appeared in earlier form as "Protection circles and the like, plus news of the north central Flanaess" in Dragon #56 (Dec 1981) in which module S4 is mentioned to be in development

S4 "The Lost Caverns of Tsojcanth" was included in the supermodule S1-4 "Realms of Horror", with some modifications.

at November 13, 2021
Email ThisBlogThis!Share to TwitterShare to FacebookShare to Pinterest
Labels: Greyhawk