Greyhawk: The Shape of a World

I don't profess to be an expert in matters involving "The World of Greyhawk" (there are far more wizened sages on the subject).  I've only run a single campaign on Oerth (T1-4 "The Temple of Elemental Evil") and that was decades ago. 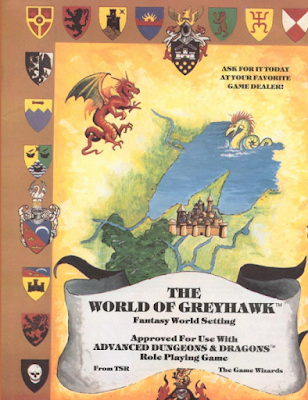 Advertisement for "The World of Greyhawk" appearing in The Dragon #39 (July, 1980) depicting the City of Greyhawk on the shores of the Nyr Dyv.

It's fascinating to read Gary Gygax's column "From the Sorcerer's Scroll" in The Dragon #37 titled "Greyhawk: The Shape of a World" discussing the soon-to-be-released "World of Greyhawk" folio, a product foretold in many of the modules preceding it.

The map of the Greyhawk Campaign came first, many years ago. The information came from a few original notes, many ideas, and the activity of the players. Just as the map was drawn from many earlier campaign maps I’d done for one game or another, so too were the states and features of the “World” drawn from many an earlier creation. When all of these odds and ends were put into play, considerable reshaping and change took place. When they were ordered and readied for formal publication, far greater mutation occurred.

Gygax is referring to the map of The Great Kingdom, repurposed as the map of The OD&D Game World, the setting for the original Blackmoor, Greyhawk, and El Raja Key campaigns.  The beautiful map by Darlene for the World of Greyhawk folio was a new iteration.

The figure line could eventually number in the hundreds of sets, with possibly a thousand different figures. The initial release will be in the 50-set range, according to Steve. Of course, I’ll be contributing to the miniatures rules, and I’m helping to select figure types. The rules and figures will be significant contributions towards developing the “World,” but more is needed.

Gary Gygax, from The Dragon #37 (May, 1980)
It's clear that Gygax envisioned the World of Greyhawk at least partly as a setting for battles to be fought using miniatures rules.  (He even provides orders of battle for two of the original Circle of Eight (Bigby, Mordenkainen), as well as Robilar, Tenser, and Erac's Cousin).

Much of the original activity in the Greyhawk Campaign came in the huge City of Greyhawk. My initial map was only an 8½” x 11” sheet of graph paper, but this was soon enlarged to a four-times size. Even that was too small, so extra, large-scale sections were done up to supplement the main map. I have now gone to what amounts to about four-game-maps size to show the whole of the place in fair detail. The mapping isn’t complete, and only a few of the most outstanding places are noted, as there is yet many months of work left before the design will be in shape to submit to TSR’s Product Development Department. Sometime in 1981 or 1982, though, you should see a giant map and gazetteer for the City of Greyhawk being offered for sale.

Gary Gygax, from The Dragon #37 (May, 1980)
It's amazing to think that a City of Greyhawk product was actually being planned at one time (perhaps in response to Judges Guild's "City State of the Invincible Overlord" (1976).  While never published, many details were included in the Gord the Rogue novels.

While that project is yet a ways off, modules of the World of Greyhawk are currently in the works. Skip Williams is working on my original outline for Shadowland, and from what I’ve seen so far, we should be able to have a final product out this year. The module will be an adventure on the Plane of Shadow—perhaps that should be Quasi-plane of Shadow. Other such modules are also in the hopper.

Gary Gygax, from The Dragon #37 (May, 1980)
"Shadowland" never came to be, although briefly surfaced in the Summer 1986 Mail Order Hobby Shop catalog as WG7 "Shadowlords" according to The Acaeum.*  The Plane of Shadow was first described in "Deities & Demigods" (1980) as a new, inner plane.
*module code WG7 was ultimately assigned to the post-Gygax "Castle Greyhawk" (1988) compilation

As I’d mentioned in a previous column, Steve Marsh sent me a wealth of material on various planes, just as I was getting my own creative processes going. At first I envisioned a long-distance exchange with manuscripts eventually going back and forth between us. Now Steve will be coming to work for TSR this summer for a couple of months or so, and I have hope that he and I can work up general outlines and hammer out details, so that only one exchange of materials will be needed for each piece.
Because of this, there might be as many as ten World of Greyhawk modules based on the planes by the end of 1981 or mid-82.

Gary Gygax, from The Dragon #37 (May, 1980)
Gygax and Marsh did apparently collaborate on a Manual of the Planes, the manuscript for which is considered lost.  It's hard to imagine ten modules based on the planes.  (Marsh also spent much of that summer working on the D&D Expert Set Rules with David Cook.)

One whole piece of the “World” remains to be covered, and from what input I receive, it is perhaps the most important sector. It is the dungeons under Greyhawk Castle. It might seem that that would be the easiest of all to put into production. Not so!
Both Rob and I liked to “wing it” as much as possible, so as to have flexibility and to tie in past events. Think of over four dozen level maps with partial matrices, skimpy notes, cryptic symbols and areas erased or penciled over due to destructive actions! The whole 50 levels or thereabouts form a cohesive dungeon, of course, so that means to undertake the project, I must sit down and handle it all together, with as few breaks as possible, in order to reflect the general oneness. This will eventually be done, yes indeed! But I don’t dare begin at this time. . . .

Gary Gygax, from The Dragon #37 (May, 1980)
Preparing the whole of Greyhawk Castle: Expanded Version into publishable format would have been particularly daunting for Gygax, given that he would have been working from Kuntz's notes for much of it.  Perhaps the 13-level, original Greyhawk Castle would have been more realistic.*
*interestingly, Gygax and Kuntz turned to the original El Raja Key as the source for WG5 "Mordenkainen's Fantastic Adventure"

Before the dungeons of Castle Greyhawk are dusted off and construction begins anew, the rough manuscript for T2, Temple of Elemental Evil, must be finalized. With the very good words I’ve heard about the Village of Hommlet offering, I’m under considerable pressure to get T2 out—but in a form comparable to T1, so there will be much agonizing and rewriting. Then, Rob Kuntz has the reworked Lost Caverns module which must be finalized also. It was used for a MDG tournament a few years ago at WinterCon, and the scenario is very good. We want to get it into print as soon as possible.

Gary Gygax, from The Dragon #37 (May, 1980)
Here, Gygax is referring to what would have been considered WG2 "The Temple of Elemental Evil" and WG3 "The Lost Caverns of Tsojcanth" (ultimately assigned the module code S4).  WG4 "The Forgotten Temple of Tharizdun" would soon follow.
at November 06, 2021
Email ThisBlogThis!Share to TwitterShare to FacebookShare to Pinterest
Labels: Greyhawk