Tom Moldvay included a sample dungeon, "The Haunted Keep", as part of a step-by-step example describing how to design a dungeon, in his section on "Dungeon Master Information", in the D&D Basic Set (1981) rulebook:

In the distant past, the Haunted Keep was the castle of the Rodemus family. It was abandoned many years ago when the family mysteriously disappeared. It is now rumored to be haunted. Strange lights and sounds are often seen and heard in the ruins by passing townspeople.

Recently, a tribe of goblins has been raiding the countryside. On their last raid they captured a dozen prisoners. The prisoners are all relatives of the player characters, who have banded together to rescue their relatives. The party has tracked the goblins to the Keep or castle, right up to the only door to the east tower.

Most of the Haunted Keep is in ruins. Only two towers remain, connected by a gatehouse, and only the first floors of these towers are intact. The Keep was built with rough granite blocks, now pitted with age. The door into the east tower is wooden and one hinge is rusted through.

A map of the east tower is provided, beneath which a winding staircase leads to the catacombs, where the Rodemus family ancestors are buried.  The lowest level consists of a partially submerged, maze-like series of natural caverns. 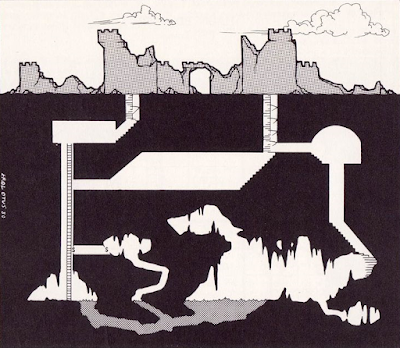 Cross section of The Haunted Keep.  Illustration by Erol Otus.

A subsequent "Sample Dungeon Expedition" follows the exploits of Morgan Ironwolf* and her companions beneath the trap door in the east tower, continuing with the "Example of Combat" on pg. B28 (see map, posted at "Jasper's Rantings" (April 20, 2015).

*Morgan Ironwolf, Sister Rebecca, and Black Dougall appear as characters in the back of the AD&D 1e "Dungeon Masters Adventure Log" (1980)

Moldvay appears to have drawn inspiration from the short story "The Rats in the Walls" by H.P. Lovecraft, in conceptualizing "The Haunted Keep".  Both involve crypts leading to subterranean caverns, beneath a castle formerly occupied by cursed nobility.

Incidentally, Wizards of the Coast included the description of a "Myron Rodemus" as an example of a non-player character "foil" in playtest material released for 5e, back in 2017 (discussed in some depth over at the Piazza).

In 2008, the collaborative project DF23: The Haunted Keep was released for download on Dragonsfoot, representing a completion of the sample dungeon.  While this had some good ideas, it didn't channel the Lovecraft source material or feel.

I had the opportunity to play in Paul Stormberg's version of "The Haunted Keep" at Virtual Gary Con XII in 2020, and had a fantastic time.  Paul really captured the spirit of Moldvay's original, and should consider publishing it.

Naturally, I ran my own version of "The Haunted Keep", back in the day, although have since developed further ideas regarding how I would like to expand it, should I ever decide to run it, again (to be covered in tomorrow's post).

at January 22, 2022
Email ThisBlogThis!Share to TwitterShare to FacebookShare to Pinterest
Labels: B/X