In the section on "Dungeon Master Information" in the Moldvay Basic rulebook, Tom Moldvay provides a step-by-step guide to creating a dungeon, starting with choosing a scenario:

A scenario is a background theme or idea which ties the dungeon together.  A scenario will help keep the dungeon from becoming a boring repetition of "open the door, kill the monster, take the treasure."

The following scenarios, with examples from modules published during the same era, convey a sense of the B/X aesthetic. 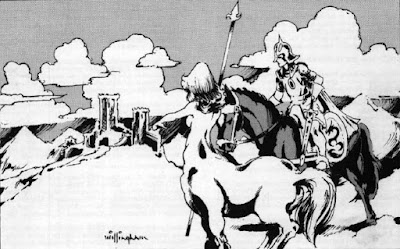 Frontispiece to module B3 "Palace of the Silver Princess".  Illustration by Bill Willingham.

The party is hired to map unknown territory.  The area might have once been familiar but is now overrun or destroyed; a strange tower might mysteriously appear overnight in a familiar area.  Dungeon modules B1 (In Search of the Unknown) and B3 (Palace of the Silver Princess) are examples of exploration scenarios.

While module B1 "In Search of the Unknown" is clearly an example of this type of scenario, the revised, green cover version of module B3 "Palace of the Silver Princess" seems more like an example of 6. Fulfilling a Quest (see below).
The reason for this became clear when Wizards of the Coast released a downloadable pdf of the original, orange cover version of module B3, which is definitely an exploration scenario (complete with stylistic similarities to module B1).
(Incidentally, the idea of a strange tower mysteriously appearing overnight really captured my imagination, back in the day, and I drew up maps for a dungeon called "The Tower of Shadows" for one of my brother's characters.)

This scenario has to do with a Chaotic invasion (either in progress or about to begin).  The characters must enter the enemy outpost, find out the strength and plans of the invaders, and destroy the outpost if possible.  Dungeon module B2 (The Keep on the Borderlands) is an example of this type of scenario.

This theme was used as the basis for the G-series by Gary Gygax, wherein the player characters must infiltrate, gather intelligence, and deal a retaliatory blow to a number of giant strongholds, continuing into the D-series.
Module B2 "The Keep on the Borderlands", was packaged together with the Basic rulebook in the 1981 Basic Set, and describes a conflict between "the Realm of mankind" and the forces of Chaos, in which the party seeks the Caves of Chaos.
Module B5 "Horror on the Hill" (1983), published a few years later, is another example of this type of scenario, wherein a hobgoblin king is preparing for an attack on Guido's Fort, an isolated frontier settlement at "the end of traders' road."

The party is usually scouting an old village before permanent settlers move in.  The ruins have often been overrun by a specific kind of monster which must be killed or driven away.  The ruins could be part of (or underneath) a thriving town!

None of the B-series modules involves this type of scenario, but grabbing a map of any village and stocking it with monsters seems like a really easy and interesting way to create an open-concept "dungeon"-type environment.
Such an idea lends itself well to a setting like the Grand Duchy of Karameikos, as presented in the D&D Expert Set rulebook, where large portions of the wilderness are held by various types of humanoids and monsters.
(I've drafted an adventure in which the player characters must explore the ruins of Lavv, prior to the establishment of the village of Kelven, which eventually becomes the city of Kelvin in GAZ 1 "The Grand Duchy of Karameikos".) 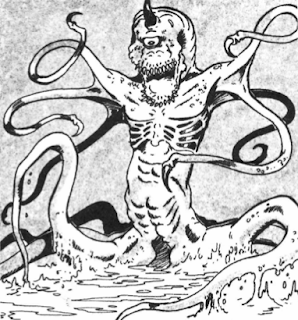 Zargon, from module B4 "The Lost City".  Illustration by Jim Holloway.

The evil is usually a monster or NPC (the exact type not known by the players).  Sometimes the evil has been deeply buried and re-awakened by recent digging.  This theme is often used along with others; for example, an ancient evil may have to be destroyed before some ruins are resettled.

Module B4 "The Lost City" (1982) is an example of this type of scenario.  An ancient creature, "Zargon", was deeply buried and in a state of hibernation until re-awakened by workers digging the foundations of a great pyramid.

To remove a curse or recover a sacred item, the players must travel to a shrine which has been lost for ages.  The characters usually have only a rough idea of its location.  The players may have to consult an oracle or seer during their visit.

None of the B-series modules involve this wilderness-type scenario, although the idea of completing a special adventure in order to remove a specific curse is also mentioned elsewhere in the D&D Basic Set rulebook.
(The AD&D 2e adventure "Hail the Heroes" (1994) for the Mystara line involves a journey to a lost temple in search of a sacred relic, and could easily be run using B/X.)

This is a scenario in which a king (or other NPC) provides a reason for adventuring.  A variation of this is a special mission for "the gods".  Quite often this scenario also involves the recovery of a sacred object or powerful magic item.

In the revised version of module B3 "Palace of the Silver Princess" the individual player characters are entrusted with a quest by the mysterious Protectors to determine the source of evil which has overtaken the valley of Haven.
Module B8 "Journey to the Rock" (1984), in which the player characters are tasked with recovering part of a magic talisman, is another example of this type of scenario.

The player characters begin this adventure as prisoners, and must escape.  The reason is clear and simple, especially if imprisonment is to be followed by the deaths of the characters.  The DM must be careful to make escape possible (though not necessarily easy).

This scenario was famously used in module A4 "In the Dungeons of the Slave Lords" (1981), in addition to the Basic D&D invisible ink module M1 "Blizzard Pass" (1983), and mini-adventure "The Great Escape" in module B9 "Castle Caldwell and Beyond" (1985).

Valuable and important persons are being held prisoners by bandits, a tribe of orcs, or an evil magic-user.  The party sets out to rescue the prisoners because they have been hired to (for an expected reward), for a debt of honor, or for some other reason.  Sometimes the player characters are only hired to guard an individual who is talking over the demands of ransom.  This scenario is the basis for the sample dungeon hereafter (The HAUNTED KEEP).

The "magic portal" is a device which magically sends creatures from one place to another.  A magic portal is usually a door into another dimension or world, and thus may easily become the point of an invasion from one of these worlds.  Portals may be known or secret.  If known, the characters may be on a mission to destroy or guard a portal used by enemies, or perhaps to reopen or repair a "closed" portal.  Secret portals can be used to make sure that the characters will visit an important area of a dungeon.  Portals might operate both ways, or one way only (teleporting into but not out of an area).

Gateways leading into several alternate worlds are described in module Q1 "Queen of the Demonweb Pits" (1980).

Moldvay uses a magic portal in the Expert D&D module X2 "Castle Amber (Chateau d'Amberville)" (1981) leading to Averoigne, a province based on the writings of Clark Ashton Smith, in a parallel world similar to medieval France.

A variation on this type of scenario is used in module DA1 "Adventures in Blackmoor" (1986) in which the player characters pass through a gateway into the ancient past.

The players find a once-human race which has lived underground for so long that it has begun to change.  Its members might have developed infravision, changed color, or begun to fall back into animal ways.  This scenario works well when used with Destroying an Ancient Evil, since Lost Races are often servants of the ancient powers.  This scenario requires extra work and imagination by the DM, since details for the Lost Race must be invented.

The Cynidiceans in module B4 "The Lost City", whose description largely matches the example, given above, are an example of a Lost Race.  (See this thread on Dragonsfoot for ideas about using Cynidiceans as a player character race).
at January 15, 2022
Email ThisBlogThis!Share to TwitterShare to FacebookShare to Pinterest
Labels: B/X, Mystara