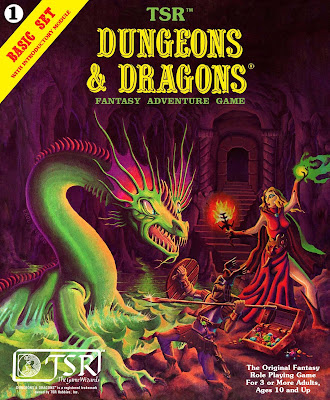 The set included a 64-page rulebook (16 more pages than the Holmes Basic rulebook), dungeon module B2 "The Keep on the Borderlands", a set of polyhedral dice (together with a crayon to fill in the numbers), and the "Gateway to Adventure" TSR catalog.

Moldvay was hired by TSR in 1980, about a year after his good friend, Lawrence Schick.  Sadly, he passed away in March, 2007.  A bibliography was compiled in this thread on Dragonsfoot.  He was remembered by Bob Kindel in this post on Swords & Dorkery. 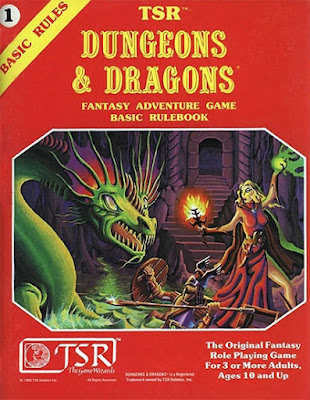 The title page credits both Gary Gygax and Dave Arneson.  Copyright is listed as 1974 (OD&D), 1977 (Holmes), 1978 (revised Holmes with material from the 1e Monster Manual), and 1981.  Moldvay Basic may therefore be regarded the linear descendant of OD&D via Holmes.

Illustrations were by Jeff Dee, David S. LaForce (Diesel), Erol Otus, James Roslof, and Bill Willingham.  Special thanks were extended to Harold Johnson and Frank Menzter "for their care and dedication in reorganizing and fine tuning this book".

I remember seeing stacks of Basic and Expert Sets on the shelves of a department store in Ottawa, Illinois, during the summer of 1981.  Our family was visiting relatives, and my parents purchased the Basic Set for me.  These were the rules I used to learn to play D&D.

at January 01, 2022
Email ThisBlogThis!Share to TwitterShare to FacebookShare to Pinterest
Labels: B/X