A spell is a formula for collecting and using magical energies.  A magic-user or cleric controls these energies with a memorized set of words and hand motions: the spell.  Each spell has its own special set of words and gestures.

In AD&D 1e parlance, all Basic D&D spells have both verbal and somatic components.  In other words, a spell caster must be able to both speak and make hand gestures in order to cast spells.  (Certain spells in Holmes Basic were also assumed to have material components).  Moreover, the spell caster must not be engaged in any other activity, such as walking or combat.

In the Holmes Basic rulebook, magic-users were not permitted to bring their magic books into the dungeon with them, but needed to return home in order to regain their spells.*  (This may have been due to the implication that magic-users possessed a separate book for each level of magic spells).

*in the Basic D&D adventure "The Chapel of Silence", published in Dragon #50, author Mollie Plants states "Since the episode begins with the characters in the midst of a journey, magic-users may be assumed to have their spell books with them.  The books are packed in strong waterproof and airtight cases which are difficult to open and close.  Cases may be opened only at times when the magic-user has absolute security for a period of several hours and in locations where the books are absolutely safe from dampness."

The new rules specify that if an adventure lasts longer than a day, the Magic-User can get his or her spells back through a period of rest and concentration.  I'm glad to see this securely placed in the rules.  All of us who act as Dungeon Masters have had to allow this on longer adventures.  Actually, the "spell book" is often a needless complication and can be dispensed with.  Of course, a particular DM can make spell books a vital part of the game - suppose evil Magic-Users hired a high-level Thief to steal the player characters' spell books?

The Moldvay Basic rulebook states that magic-user and elf spells are stored in large spellbooks, containing all the spells that he or she has learned (pg. B16).*
*it is later specified in the Cook/Marsh Expert rulebook that magic-users and elves must have their spell books with them in order to regain spells (pg. X11)

1. Cure Light Wounds* - may alternately be used to cure paralysis
2. Detect Evil - causes creatures with evil intentions or evilly enchanted objects to actually glow (further specifies that "Chaotic" is not always "evil" and that poison and physical traps are neither good nor evil)

4. Light* - may alternately be cast at a creature's eyes, causing blindness if the saving throw vs. spells is failed (furthermore stating that in the D&D Basic rules, a blinded creature may not attack)

6. Purify Food and Water - further specifies that one ration of food (iron or standard), six skins of water, or enough normal food to feed a dozen people is purified 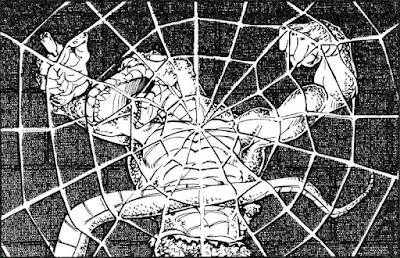 The effect of a Web spell, depicted as a net-like, spider-type web (Moldvay Basic, pg. B18).  Illustration by Jeff Dee.

Moldvay lists twelve 1st level magic-user and elf spells (two less than in Holmes, "Dancing Lights" and "Enlargements" are not included).  Differences from the Holmes Basic rulebook are specified, below:

1. Charm Person - slightly expands the types of creatures affected, to include both mammalian and reptilian (ie. lizard men) humanoids, up to the size of an ogre (including bugbears).  Chances for new saving throws per intelligence are streamlined.
It's later stated in the Monster section (pg. B29) that charmed characters are too confused to use any spells or magic items, although the death of the charming monster will usually break this type of charm.  Dr. Holmes' reflected upon this:

A charmed Magic-User is too confused to do magic?  Boy, that last rule would make a dramatic change in the conduct of my game, where the player characters would be apt to yell, "Don't kill the evil magician!  Let me try to charm him first, then use him to wipe out the rest of the monsters on this level.")

3. Floating Disc - specifies that a floating disc cannot be created in a space occupied by another object

4. Hold Portal - clarifies that a creature of 3 hit dice (or greater) than the caster may break open a held portal in one round

5. Light* - similar to clerics (except for duration).  The reversible form takes the place of the 2nd level magic-user spell "Darkness" in Holmes.

6. Magic Missile - states that a magic missile will automatically hit any visible target (no hit roll is needed) and that multiple missile may be shot at different targets

7. Protection from Evil - similar to clerics (except for duration)

9. Read Magic - equivalent to Holmes, although further states that a magic-user's or elf's spell book is written so that only the owner may read them without using this spell

11. Sleep - duration is clarified and number of creatures affected is streamlined.  Further specifies that a sleeping creature may be killed (regardless of its hit points) with a single blow with any edged weapon

1. Continual Light* - equivalent to Holmes, although may alternately be cast at a creature's eyes

2. Detect Evil - same as for clerics

3. Detect Invisible - the description is missing!  (Presumed equivalent to Holmes.)

4. ESP - permits caster to actually "hear" thoughts, and further specifies that any single creature's thoughts may be understood (regardless of the language), although the caster must concentrate for one full turn in a single direction (implying that the target creature must be stationary) and spend an extra turn to sort out the confused jumble of thoughts when more than one creature is in the line of "hearing"

5. Invisibility - specifies that all items carried or worn by the character also become invisible, but become visible again and remain visible when leaving the character's possession.  Also that an invisible person becomes visible again when attacking (as per Holmes, but also including missile attacks) or casting a spell

8. Locate Object - similar to Holmes, although specifies it cannot locate a creature

9. Mirror Image - similar to Holmes, although specifies that attacks will always hit an image rather than the caster, whether or not a hit is actually successful

10. Phantasmal Force - a 20' x 20' x 20' area of effect is specified, and bonuses to saving throws and further limitations are described.  Dr. Holmes' comments:

Phantasmal force has been appropriately weakened in the new rules, however; even if the victim fails a saving throw, he or she is not permanently harmed by the phantasm.  If determined to be killed, the character actually only passes out, and recovers in 1d4 turns.  Presumably, hit points lost in this manner are also restored after 1-4 turns.  This makes the phantasmal force a much fairer attack.  With the old spell, the M-U could summon a dragon or demon and, if the poor victim failed his saving throw trying to disbelieve it, he was as good as dead.  A phantom, it seems to me, should indeed be terrifying, but basically harmless.

J. Eric Holmes, from Dragon #52
11. Web - reduces the area of effect to 10' x 10' x 10' and further specifies that flames will destroy a web in two rounds, and that anyone wearing gauntlets of ogre power can break free in four rounds

at January 08, 2022
Email ThisBlogThis!Share to TwitterShare to FacebookShare to Pinterest
Labels: B/X, Holmes