The evasion table on page X23 in the Expert rulebook is based upon a similar table in OD&D vol. 3, likely adapted from Dave Arneson's "Blackmoor" campaign material (see "The First Fantasy Campaign: Into the Great Outdoors").

A simplified system for magic item saving throws is introduced (chances equivalent to the character's saving throw, plus a bonus equal to the object's bonus in combat).

Values for the javelin, staff, and lance are given (new weapons, introduced on page X9), as well as rules for lance combat (double damage with a successful hit, charging on horseback).*

*in "Part 6: Monsters" it's stated that "hits on charging creatures by spears or pole arms braced against the ground will do double damage" 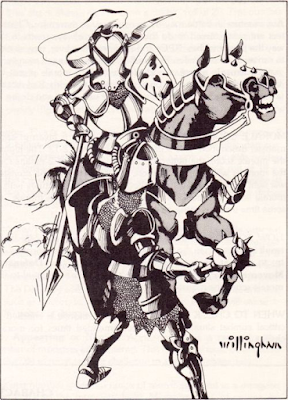 A simple system for unarmed combat is introduced (1-2 points of damage per successful hit, plus any strength modifiers).*

*used in module X2 "Castle Amber", where it's further stated there's a 5% chance of a knockout, lasting 1-10 rounds, whenever maximum damage is rolled (ie. 50% of the time)

"Chainmail" is recommended for large-scale battles in OD&D, whereas "Swords & Spells" is mentioned in the D&D Expert rulebook.

*underwater combat is not covered in the D&D Expert rulebook

Rules for aerial combat are based upon a similar section in OD&D vol. 3, likely adapted from Dave Arneson's "Blackmoor" campaign material (aka "Battle in the Skies")*

*it's stated that casting spells requires a stable means of support, and that "a mount that flies by flapping its wings is definitely not stable!"

Reproduced from Moldvay Basic, possibly for those using the Expert rulebook together with Holmes Basic.

at February 20, 2022
Email ThisBlogThis!Share to TwitterShare to FacebookShare to Pinterest
Labels: B/X