Much of "Part 4: The Adventure" is drawn from OD&D vol. 3.  It's interesting to compare the two, to determine what was included, and what was left out. 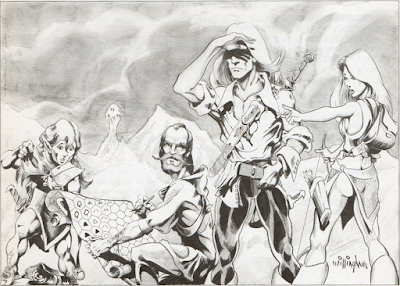 Cover illustration for the Hexagonal Mapping Booklet (1980/1), by Bill Willingham

Base towns are defined as "a place where the party can buy equipment and hire men and retainers, where treasure can be sold (and perhaps magic items identified), and where clerical healing is available for a suitable "contribution" or service."

"Blackmoor" and "Grayhawk" are specifically mentioned as examples of base towns in OD&D vol. 3.

Steps for journeying into the wilderness are given:

1. Deciding where to go.
2. Deciding what supplies are needed.
3. Equipping and outfitting the party.
4. Establishing a marching order.

The example describes preparations for a journey to the city of Specularum (further detailed in the Sample Wilderness section).

"Hexagonal-grid maps are the best because there are six spaces to go to that are an equal distance from the space started from; with a square grid there are only four (diagonals distort the distance)."

Penalties for moving through different types of terrain (ultimately derived from those in "Outdoor Survival"), as well as rules for forced marches are given.*

Fighting Men: will demand a jousting match, or else a 100-600 gp toll, (rules for jousting from "Chainmail" are recommended; see also "Chainmail Revisited: Jousting in D&D" by Jon Pickens (The Dragon #17, Aug 1978)

Magic-Users: will send passerby after treasure, using "geas" (with magic-user claiming at least half of all treasure so gained, as well as the first choice of magical items), or else demand a magic-item or 1000-4000 gp as toll

Clerics: will require passerby to give a tithe (10%) of all money and jewels, or send on a Lawful or Chaotic task, using "quest" (evil high priests may simply attempt to slay any Lawful or Neutral passerby, who don't pay a tithe)

Castle encounters are not included in "Part 4: The Adventure", although are covered briefly in "Part 8: Dungeon Master Information" (pg. X59).

Guidelines for the size of creatures that can be carried by an aerial monster are given.

Rules for rest are also covered.

Likewise based on chances and mechanics from "Outdoor Survival" (additional information given in "Part 8: Dungeon Master Information" (pg. X56)

Specialists mentioned in OD&D vol. 3, not included in the Expert rulebook:

Assassin (2000 gp/mission): The role of this hireling is self-evident.  The referee will decide what chance there is of his mission being accomplished by noting the precautions taken by the intended victim.  Assassins are not plentiful, and some limit on the number employable during any game year must be enforced.

Smith (25 gp/month): As already mentioned, a Smith is able to assist an Armorer.  For every 50 horses or mules in a player character's force there must be one Smith to maintain them.

The table for hiring mercenaries in OD&D vol. 3 is reproduced and expanded in the Expert rulebook.*
*the cost for posting notices is given as 100-600 gp/week in OD&D vol. 3
at February 19, 2022
Email ThisBlogThis!Share to TwitterShare to FacebookShare to Pinterest
Labels: B/X