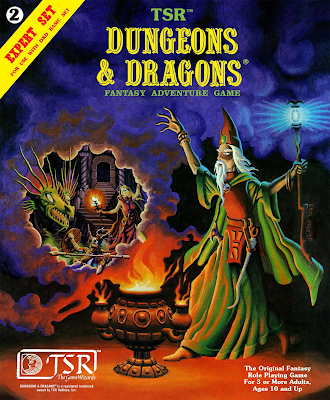 The set included a 64-page rulebook, dungeon module X1 "The Isle of Dread", a set of polyhedral dice (together with a crayon to fill in the numbers), and the "Gateway to Adventure" TSR catalog.

*Marsh prepared the initial typewritten manuscript of the D&D Expert rulebook during his 1980 summer break from law school (see Grogtalk Episode 80, April 13, 2021 for a recent interview) 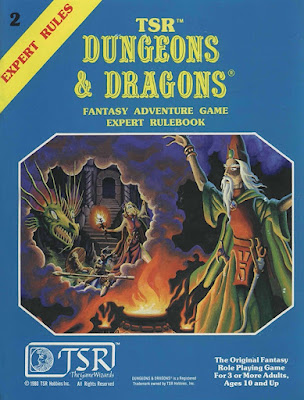 D&D Expert Rulebook (1981).  First printing (no white circle around the 2 in the upper left hand corner).

*early printings only credit Dave Cook, and copyright was listed as 1980 (see here)

The expanded scope of the rules involves adventures in the wilderness and establishing domains:

Adventures will take place outside the dungeon.  A "wilderness" area will be an even greater challenge to players, with stronger monsters and greater wealth to be won.  In expanding the campaign, the DM will create whole nations and cultures, giving the characters a history and background.  Adventurers can even shape the history of their world as they become more powerful.

As player characters grow in wealth and power, they may build castles or strongholds to keep themselves and their retainers safe.  They may encourage settlements around their fortresses in order to support them, eventually becoming rulers of their own territories.  From their wilderness bases, they can settle and rule larger areas, bringing civilization to the wilderness.

Advice is also given for using the D&D Expert rules with Holmes Basic, for a Holmes/Cook/Marsh or Holmes/X campaign, summarizing the changes introduced by Moldvay Basic.
at February 05, 2022
Email ThisBlogThis!Share to TwitterShare to FacebookShare to Pinterest
Labels: B/X