The Amber family (d'Ambrevilles) were revisited in GAZ 3 "The Principalities of Glantri" (1987) by Bruce Heard.

The d'Ambrevilles came from a parallel world similar to medieval France, where sorcery was forbidden and mages burned at the stake.  The d'Ambrevilles left through a magical gate and settled in Glantri.*

During the darker years of Glantrian history, the d'Ambrevilles and their estate disappeared without a trace,** only to reappear years later,*** as if nothing had happened.  In the meantime, several of his family members betrayed Etienne in hopes of becoming the head of the household.  Fortunately, a band of adventurers intervened (see module X2) and saved Etienne from oblivion.  Etienne's relatives died; in his great generosity, Etienne wished his relatives back to life.  He wisely forced upon them a powerful magical oath to ensure they would not act against him again.  These eccentric relatives never again betrayed him, not knowing what kind of horrible fate the oath would bring upon them.  The whimsical d'Ambrevilles now spend a great deal of their time embarrassing other nobles.

In the years following their return to Glantri, the d'Ambrevilles managed to assist the passage of other spell-casters from their world to this.  These people are now nobles faithful to Sylaire; they, with many of their servants and retainers, now form a fair portion of New Averoigne's population.  Most speak both Common Glantrian and French.  They were quick to call their new domain "La Nouvelle Averoigne," and rule it the more to resemble their homeland.  Alas, they brought with them the curse of lycanthropy, spreading it through New Averoigne's hills.

An overview of the Principality of New Averoigne (la Nouvelle Averoigne) in western Glantri is provided (further detailed in PC4 "Night Howlers"): 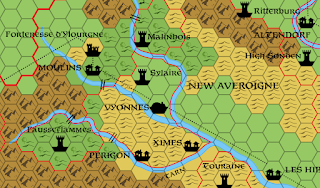 Central portion of New Averoigne (La Nouvelle Averoigne) in the Principalities of Glantri, from the replica map by Thorfinn Tait, posted at the Atlas of Mystara.

New Averoigne is famous for its excellent wines and sparkling beverages sold all over the nation.  Its specialty is all food-related businesses.  Local chefs boast they can cook anything, from normal ingredients to monster meats.  Many fruits, vegetables, meats, and dairy products are available in this pleasant region.  The inhabitants are an easy-going people and the area boasts many famous entertainers and actors.

Weavers produce many clothes in various styles.  New Averoigne is probably the largest producer of furs, especially different types of wolf.  These fur coats can reach high gold value at the capital, because of their workmanship, and because they are a mark of class among the nobles.  Belladonna is also a local production.*

*belladonna was included in the equipment list in OD&D vol. 1 "Men & Magic" (see this thread** on Dragonsfoot for ideas on how to use it)

at May 14, 2022
Email ThisBlogThis!Share to TwitterShare to FacebookShare to Pinterest
Labels: BECMI, Mystara