X2 "Castle Amber (Château d'Ambreville)" by Tom Moldvay was the second module published for use with the D&D Expert Set.  As in X1 "The Isle of Dread" and B4 "The Lost City" there is a heavy emphasis on pulp fiction/weird fantasy tropes. 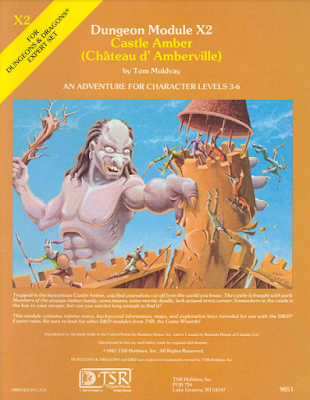 Cover to module X2 "Castle Amber (Château d'Ambreville)" (1981) by Tom Moldvay.  Illustration of the Colossus of Ylourgne* by Erol Otus.

*the face of the Colossus turned out to be an unintentional caricature of Moldvay, according to this interview with Otus, on Talking TSR).

The player characters are on a journey to Glantri City, although become lost after taking the wrong fork in a river.  They awake the next morning in the foyer of the mansion of the legendary Amber family.

The Amber family came from another world, similar to medieval France in our world, and settled in the Principalities of Glantri.

For a century or so, the Ambers were one of the major powers in Glantri.  In particular, the seventh and last Prince, Prince Stephen Amber, was one of the most powerful magic-users in the history of Glantri.  Suddenly, however, the entire Amber family and their mansion, Castle Amber, disappeared.  They were never seen again and no one knows for sure what happened to them.  In time, the Ambers became legends, the subjects of tales to frighten misbehaving children.

Members of the Amber family are clearly modeled after the Amber royal family from Roger Zelazny's "The Chronicles of Amber", although credit for the inspiration is not explicitly given.

The mansion is surrounded by a deadly gray mist, similar to the Mists of Ravenloft from module I6 "Ravenloft" (1983) by Tracy and Laura Hickman, published two years later. 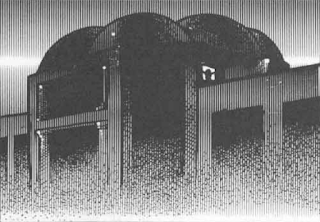 A deadly gray mist surrounds Castle Amber.  (Is that someone in the window?)

The mansion is divided into five major sections.

Notable rooms include the Grand Salon (featuring a boxing match), the Dining Room, and the Master Bedroom.

Notable encounters include the Maiden and the Unicorn, the Wild Hunt, and the Blood-Stained Arch. 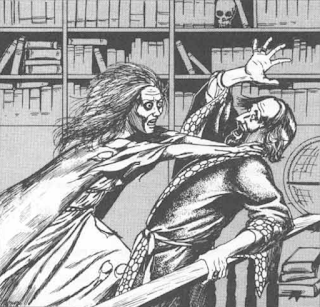 One of the main encounters draws inspiration from "The Fall of the House of Usher" by Edgar Allan Poe.

Notable rooms include the Throne Room, the Ballroom, the Card Room,* and the Green Room (featuring an incarnation of the Green Man),

*possibly based on/inspired by an article by Kevin Hendryx "Deck of Fate" in The Dragon #26; see also "The Tarot of Many Things" in Dragon #77; the magical effect of one of the cards is the "strength" spell, from the Holmes Basic rulebook

Notable encounters include the Magical Letter Square, the Brain Collector, the Alchemistry Laboratory, and the Entrance to the Land of the Ghouls.*

*it is suggested that the DM create an underground labyrinth and ghoul kingdom to supplement the adventure, something I did when I first ran the module, back in 1985 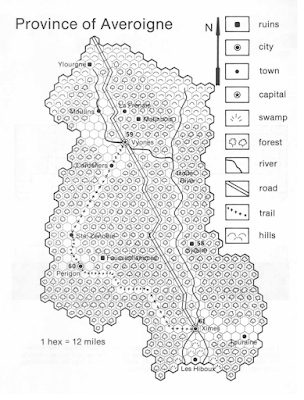 Hex map for the province of Averoigne, from module X2 "Castle Amber".  (The party appears at "X").

The player characters pass through the Gate of the Silver Keys into the province of Averoigne,* a wilderness based upon the stories of Clark Ashton Smith.

*pronunciation is given as "Av.ur.wan.ye" on pg. 27, although "Av-er-RON" is technically more accurate

The party must locate four special magic items in Averoigne:

These items are linked to four scenarios based upon short stories by Clark Ashton Smith:

I so thoroughly enjoyed this part of the module the first time I ran it, that I incorporated all four scenarios into an AD&D campaign I was running for my friends, a couple of years later.

The Tomb of Stephen Amber:

Once the four special magic items are collected, it is possible to summon the tomb of Stephen Amber, and break his curse.

***Sun Brothers (Sollux) originally appeared as "Saraphs" (for AD&D) in an article by Moldvay "Demons, Devils and Spirits" in Dragon #42, and subsequently in module DA4

at May 07, 2022
Email ThisBlogThis!Share to TwitterShare to FacebookShare to Pinterest
Labels: B/X, Mystara