The ultimate fate of Etienne d'Ambreville is decided in "Mark of Amber" (1995) by Aaron Allston, Jeff Grubb, and John D. Rateliff, an audio CD tie-in adventure to the "Glantri: Kingdom of Magic" boxed set, released as part of the AD&D 2e Mystara line. 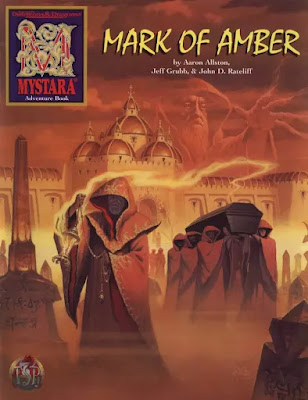 Cover to "Mark of Amber" (1995) adventure, by Aaron Allston, Jeff Grubb, and John D. Rateliff.  Illustration by Den Beauvais, from a concept by Jennell Jaquays.

"Mark of Amber" involves a return to Chateau d'Ambreville, and is a sequel to "The Immortals' Fury" campaign arc in the "Wrath of the Immortals" (1992) boxed set, rather than to module X2 "Castle Amber", itself.

Nevertheless, the adventure fills in plenty of details regarding the early history of the Amber family, dating back to when they fled Old Averoigne, as well as events following the conclusion of module X2:

For a time, Etienne traveled incognito, learning about the changes to Glantri and the world at large during the years he had lain entranced in his coffin.  It is thought that during this time he also visited many other worlds, and learned there spells not otherwise known on Mystara.  He visited Old Averoigne to see what had happened there since the d'Ambrevilles left.  Little had changed; a new generation of rulers still hunted magic-users and burned them as witches.  If anything, the nation was in worse shape than ever.

But he discovered that an old friend of his, one who had not come to Mystara, was still alive.  Genevieve de Sephora, now posing as her own great-granddaughter, still ruled the territory of Sylaire from her great tower.  She was delighted to see Etienne and weary of the worsening situation in Averoigne.  She made him an offer.  She'd help him transport her entire tower to Mystara for him to live in and help him rebuild his life.  He agreed.

Together, they moved the great tower through a gate back to Nouvelle Averoigne.  They cleared away the rubble of le Chateau d'Ambreville, erected the tower in its place, and then rebuilt the castle around the tower. naming the new building Chateau Sylaire.

Additional events following the "Wrath of the Immortals" are described in AC1010-12: Poor Wizard's Almanac I-III and Book of Facts (1992-4) by Aaron Allston and Ann Dupuis.

On his now-defunct website aaronallston.com, Allston revealed that Mark of Amber "was originally written for the D&D; game rather than the AD&D; game and was titled Return to Castle Ambreville."

In his product history for the adventure, Shannon Appelcline states that:

Allston was quite happy with the result, saying that "it had a plot whose outcome was determined by player-character interaction but still functioned as a plot, [and] it had a lot of material on handling crises resulting from PCs leading the events off into unexpected directions".

Allston likely wrote "Mark of Amber" shortly after "Wrath of the Immortals", although publication of the adventure was delayed:

Jeff Grubb was brought in to revamp Allston's original manuscript.  He needed to convert it to AD&D, link it to the Glantri boxed set, and also support the Audio CD system.  Grubb's work went smooth, but Allston wasn't thrilled by the mandated reliance on the Audio CD, which he felt was "harmful to [the adventure's] usefulness".

A minor correction to Appelcline's product summary is that the Nucleus of Spheres was altered to drain from the Sphere of Entropy rather than the Sphere of Energy at the conclusion of "Wrath of the Immortals".

"Mark of Amber" was edited by John D. Rateliff, and features multiple new interior illustrations by Jim Holloway (in addition to a few recycled pieces), both in color as well as black and white. 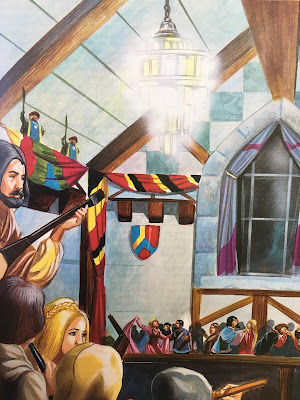 Illustration by Jim Holloway, from "Mark of Amber"

Holloway was one of the illustrators for module X2 "Castle Amber" and so his contributions to "Mark of Amber" are fitting and aesthetically quite pleasing.

Cartography was by Michael Scott, and calligraphy by Elise Boucher.  Decorative page borders were by Randy Asplund-Faith and illuminated letters by Robin Wood.

The first part of the adventure describes the castle grounds and rooms within Chateau Sylaire.

The chateau was reconstructed larger that before, with a second floor to each of the wings, in addition to attic spaces.

The central part of the mansion was built around the reconstructed tower of Sylaire.

In Search of Etienne:

The second part of the adventure details a timeline of events, interspersed with dream sequences in which the actions of the PCs can influence the outcome.

An appendix includes detailed biographies and game statistics for four generations of d'Ambrevilles, as well as retainers, employees, servants, and others. 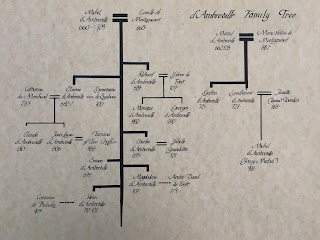 Many of the entries feature thumbnail illustrations by Holloway, which are a nice touch.

at May 21, 2022
Email ThisBlogThis!Share to TwitterShare to FacebookShare to Pinterest
Labels: Mystara